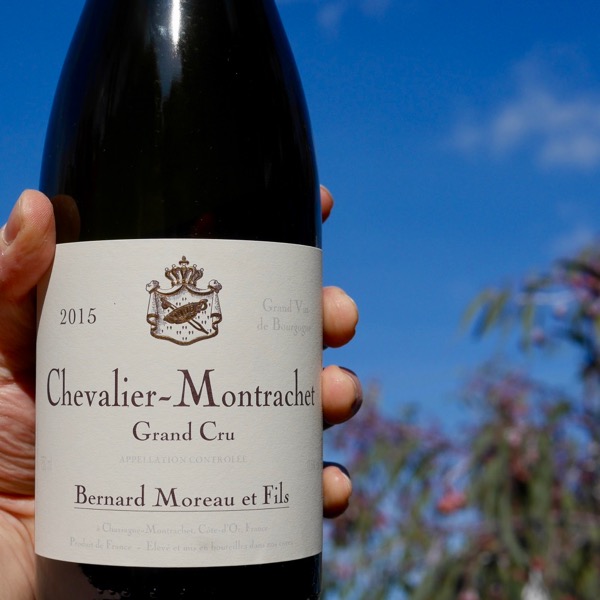 One of only 5 white Grand Cru Burgundies!

Good freshness to the intensely mineral-inflected and beautifully well-detailed middle weight plus flavors that culminate in a hugely long and palate staining finish. This classy and zesty effort is quite stylish and the class of Chevalier is evident. 2025+

Full disclaimer – Domaine Bernard-Moreau et Fils has a sentimental place in my wine history. Alex came to work with us at Yering Station in 1999, I headed to Chassagne later that year working with him for the harvest. The hospitality of his family and the people of Chassagne was boundless! Since then the Domain’s portfolio has expanded to include a presence in Volnay and the addition of the two Grand Cru’s Bâtard-Montrachet and Chevalier-Montrachet. Under Alex’s leadership, the wines have continued to push to achieve excellence. It’s with a certain amount of pride that I offer his wines to the Wine Decoded community.

The landscape of runs from just south of Chassagne (left) across to Puligny. The Grand Cru’s are in the 2nd and 3rd photo from the right. Yes, these pic’s were taken pre-digital! Read an almost finished retrospective of the vintage in the Wine Bites Mag.

The winery’s roots go back to 1809 when Auguste Moreau built a cellar across from the Champs Gain vineyard and farmed his few hectares of Chardonnay and Pinot along the golden slope. The 1930s saw an expansion of the family’s vineyards under the guidance of Marcel Moreau.

Roughly 80% of the Domaine’s current vineyard holdings were acquired by Marcel. At age 14, Bernard Moreau took over the vineyards and cellar in the early 1960’s. In 1977 the reputation of this great estate was fully established under the leadership of Bernard and Françoise Moreau and the winery was named Domaine Bernard Moreau. In addition to the changes in equipment, farming and winemaking, they
also purchased additional land bringing the vineyard total to 14 hectares. To help with winemaking, viticulture and sales, sons Alex and Benoît joined the Domaine after having worked in New Zealand, Australia and South Africa. Alex and Benoit loosely split the responsibilities of the operation with Benoit more focused on the vineyards and Alex more focused on the cellar.

As with most all great Burgundian estates, the emphasis at Domaine Moreau is on terroir. Treat the vineyards right and they’ll reward you ith superior fruit. To maintain healthy, balanced soils the winery uses organic fertilizers and no pesticides. To ensure greater flavor intensity they farm the land for lower yields through pruning, debudding, green harvesting in August, leaf thinning for Pinot Noir (on the morning sun side), and the planting of cover crops in certain vineyards to encourage competition and soak up moisture.

The 1er Cru Chardonnays are barrel fermented and aged in French oak barrels (10%-30% new). The wine spends between 12 and 18 months in wood with a little lees stirring early on for added texture. Says Bernard, “The spirit of our winemaking is to not touch the wine too often. For Chardonnay, our aim is to produce very clean and precise wines which are not too austere. We like the minerality and purity.”
The red wines are aged in French oak barrels (10%-50% new) for 12 to 20 months depending on the vineyard and vintage. Bernard states, “For our Pinot Noirs we don’t do any racking, fining or filtration. We want to make the purest expression of the Pinot Noir from our vineyards.”

The Moreau family’s 2015 Chevalier-Montrachet is equally stunning on both the nose and palate. The classic and very beautiful bouquet delivers a classic blend of apple, pear, lemon, hints of the crème patissière to come, complex, chalky minerality, lemon blossoms and vanillin oak. On the palate the wine is deep, full-bodied and utterly seamless, with great balance and focus, a superb core of fruit, marvelous soil signature and a very, very long, vibrant and youthful finish. A wine that is very deep, light on its feet and includes all good things! 2020-2060.