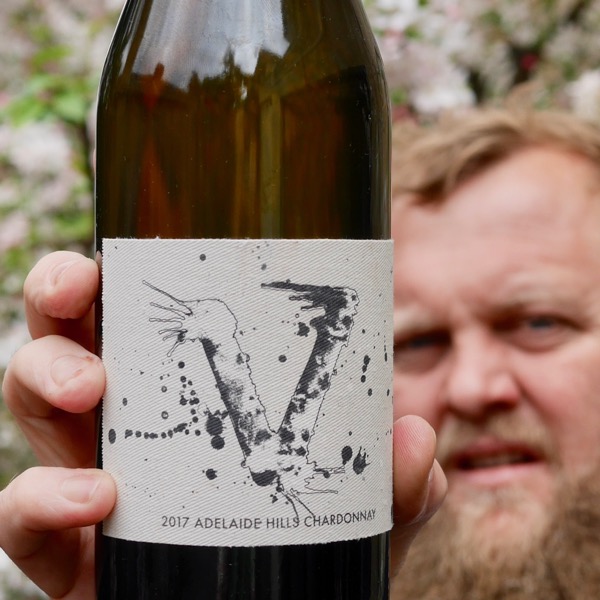 Michael, shows superb attention to the texture of all his wines. This has a lovely line of fine acid. There loads of detail, complexity, and layers wrapping a beautiful core of fruit. Citrus, green apple, just a faint whiff of bruised apple, not at all oxidised. There is power yet delicacy to this delicious wine. The complexity is deceptive, you could spend a long time trying to pulling it apart, or, you could do what I did and just drink it!

A fantastic comparison to the Les Hértiers du Comte Lafon Mâcon Milly-Lamartine 2016. Blind tasting them side by side would be a fun game to play!

Our Chardonnay fruit was hand harvested from the Bowe-Lees and Loveys Vineyards in Woodside, Adelaide Hills which lies 390 meters above sea level. Foot crushed at the winery and held cold for several days prior to pressing. Post pressing, this wine was transferred with full solids to a mix of 3-5 year old barriques then fermented naturally and left on full lees prior to being racked by gravity a couple of times in December. Bottled without fining or filtration.

VANGUARD /ˈVÆNɡⱭː(R)D
noun: vanguard; plural noun: vanguards
People or works that are experimental or innovative, particularly with respect to art, culture, and politics.
VANGUARDIST /ˈVÆNˌɡⱭːDɪST
Pushing the boundaries of the norm or status quo

Michael Corbett has timed it well! He has entered the fray when Australia’s wine lovers are ready!

I’ve made mention of the shifts toward fresher more vibrant reds in McLaren Vale and the Barossa in the  past.

Tasting Michael’s red’s and white he’s making wines that encompass this philosophy. For decades winemakers argued that you couldn’t make ripe wines in these regions without hitting 15% alcohol, we had the overblown ‘Dolly Parton’ Chardonnay phase.

Perhaps it’s his time in working in NZ that has allowed him to discern the earliest possible point fruit is ripe and given him the delicate touch needed to coax the most out of it.

Michael has earned his stripes, get’s the science, and, experiments with clear intent. The wines are not at all extreme, they are poised, with great texture, harmony, intrigue, and, personality. The élévage is impressive.

Michael talks of pushing the boundaries, and, he does, but in a clever way. For those that have read my thoughts on natural wine, you’ll know I will not accept lazy makers, using the name as an excuse for faulty wine. There is absolutely no worry about that ever happening at Vanguardist!

Milky, aniseed and bruised apple, with floral scents, maybe some citrus. It’s light and tangy, plenty of crunch and flavour, despite its delicate frame, subtle chalky texture, lemon and rind, bell-clear acidity, excellent line and length. There’s a touch of cider edginess, yet it’s clean and fresh. So refreshing and good to drink. Hard to not to race through it, though it’s more than just yum: it has complexity and energy. Yes.

I was one of many who thought Corbett mad when he picked the fruit for this wine at an edgy 11.5 degrees Baume, but going at the earliest suggestion of ripeness has paid off. The wine is thrillingly taut and high-toned with a sparkling, crystalline edge, but somehow manages to also deliver a degree of mid palate richness and texture that defies the numbers. Its jaw droppingly good.