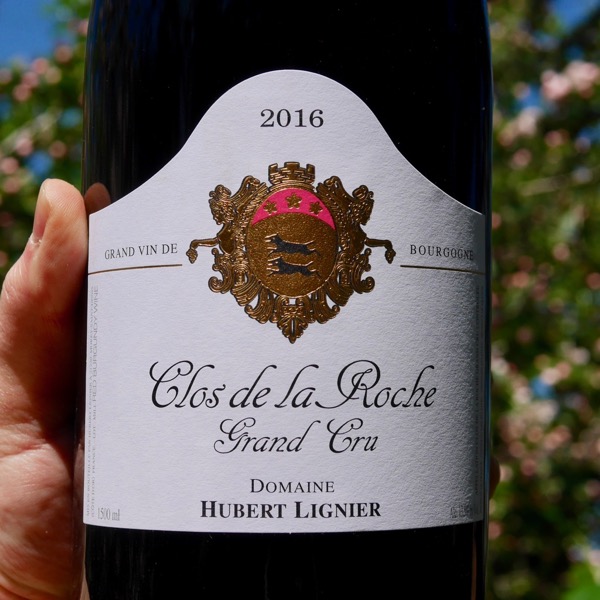 Surface area: 90 ares over two parcels:
• Monts Luisants: 62 ares; planted between 1955 and 1965 on hillsides with a 25% gradient.
• Fremières: 28 ares; planted between 1953 and 1960
Thin soil composed of white limestone, clay and marl over compact rock known as “dalle nacrée” (pearly flagstone) from the Middle Jurassic.
The wines are always well-coloured, aromatic, dense and complex due to various mineral compounds. The wines are powerful due to their intensity on the palate, but their tannins are concentrated, fine and silky. This is a charismatic wine of great class! Built for very long ageing.

The 2016 Clos de la Roche Grand Cru is matured in 30% new oak with up to 30% whole cluster fruit, two-thirds from Montluisants and one-third Fremiers. It has an intoxicating bouquet that is extraordinarily complex: shimmering red berry fruit, blood orange, incense and a touch of crushed violet. The palate is medium-bodied with fine grain tannin, wonderful depth and harmony, laser-like focus toward the finish that lingers in the mouth. Stunning mineralité here—the tongue feels as if it licked limestone 30 second after the wine has disappeared. If there is a better Clos de la Roche then I have not tasted it (yet).

The 2016 Clos de la Roche from Laurent Lignier is an absolute classic in the making. The nose delivers a refined and nascently complex constellation of black plums, sweet dark berries, a touch of lavender, gamebird, a very complex base of soil, violets and nutty new oak. On the palate the wine is deep, pure and full-bodied, with a sappy core, ripe tannins, fine backend mineral drive and a very long, complex and utterly complete finish. A brilliant example of Clos de la Roche! 2030-2090.

Good dark red. Lovely aromatic nose combines purple and red fruits, licorice, violet and spices. Wonderfully silky on entry, then broad and intense in the middle palate, offering superb depth and juicy minerality to its purple fruit and spice flavors. The Ligniers had a good yield here and this wine shows no sense of stress (by comparison, the 2015 bottling is more reserved). Finishes very long, spicy and light on its feet, with terrific palate-saturating breadth and very refined tannins.

A whiff of volatile acidity does not really materially diminish the appeal of the earthy and markedly sauvage-inflected aromas of both red and dark pinot fruit that display a top note of various floral elements. There is excellent volume and mid-palate density to the broad-shouldered flavors that deliver fine length despite the same slightly drying finish. Once again my projected range offers the benefit of the doubt that the dryness will eventually round out with some time in bottle.