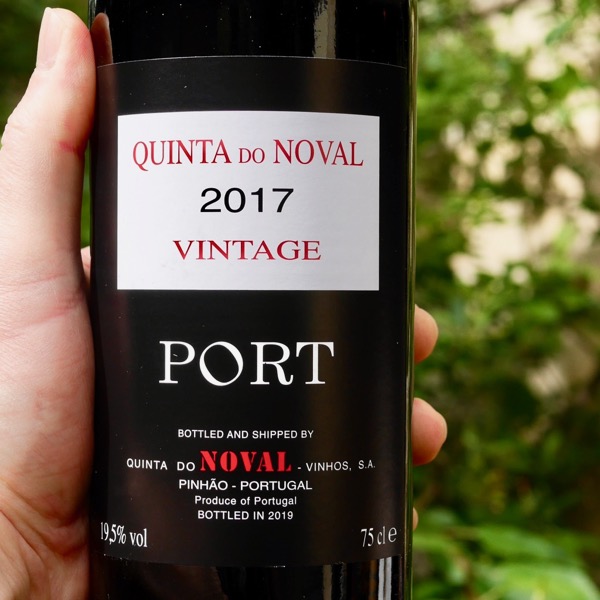 As always this 100% single-quinta wine is drawn from Noval’s own vines. There are three core parcels, all near the winery—the terraces directly surrounding the winery in Pinhão, the vines in the Roncão Valley and a parcel overlooking the Douro River.  Each year, the blending proportions for the Vintage Port will vary depending on the vagaries of the vineyard. The 2017 is a blend of Touriga Nacional, Touriga Franca, Tinta Cão and Sousão grapes predominantly from Pinhão that were trodden by foot and fermented in traditional lagares with temperature control at 28ºc. The wine was then matured for 18 months in wooden barrels and comes in at 99 grams per litre of residual sugar. The 2017 declaration represents only 10% of Noval’s entire production. It is deep and structured yet with a finesse that is hard to compute and a length and class that are pretty much unique in the world of Port.

Vintage Port is one of the world’s most extreme styles. It’s only made in the best years when the ‘Vintage is Declared’. Taylor’s and Fonseca are two of the very best houses.

Take an array of red varieties with different personalities, throw them in a lagare, grab a couple dozen stompers and get them to tread the grapes, ferment it for a bit then pour in some brandy spirit leaving you with high sugar, tannin, acid, and, alcohol backed by rich fruit.

On face value how could it work? Like all the great wine styles in the world the top echelon, the best houses of Portugal have found a way.

The searing acidity of the best vintage ports and exceptional tannins balances the sweetness of the sugar, alcohol and of course fruit. Despite the strength of these superb wines they have amazing finesse, elegance, and, restraint.

The complexity of these wines offers such intrigue!

The Importance of Blending

At Yarra Yering we made a VP style, the Port Sorts, renamed Pot Sorts for export after naming rights for the use of Port were granted solely to the Portuguese.

In addition to the above the best known red varieties for Port production include the Touriga Francesa, and, Tinta Barroca but in total there are around thirty types of Port grape. Most of these varieties have relatively small thick-skinned berries which produce the dense concentrated must (grape juice) needed to make Port.

Although they may be planted separately, the varieties are normally harvested and fermented together. Each grape variety contributes its own particular character – such as the intense flavours of woodland fruit, delicate floral scents, exotic spicy notes or the wild resiny aromas of gumcistus – to the nose of the wine. The grape varieties work together like instruments in an orchestra to create a subtle, complex and multi-dimensional harmony.

Port is a fortified wine. Fortified wines are made by adding a proportion of grape spirit, or brandy, to the wine at some point during the production process. Port is arguably the greatest of all fortified wines and its paramount expression, Vintage Port, ranks alongside the finest produce of Bordeaux or Burgundy as one of the great iconic wines of the world.

In the case of Port, the addition of the brandy takes place before the wine has finished fermenting. This means that the wine retains some of the natural sweetness of the grape, making it rich, round and smooth on the palate.

One of the fascinating aspects of Port wine is its variety of different styles, each with its own characteristic flavours, from the intense berry fruit flavours of a Reserve or a Late Bottled Vintage to the rich mellowness of an Aged Tawny or the sublime complexity of a Vintage Port.

About Quinta do Noval

Quinta do Noval is one of the great Port houses. Not only does Noval produce the most famous Vintage Port of them all, the legendary ‘Nacional’, it was also the creator of the “Late Bottled” style in 1954 and of single vintage Tawnies (Colheita) in 1954. It is also the only big name producer whose top wines are exclusively single vineyard (i.e. “Quinta”). Think of the difference between a Burgundy domaine and a Burgundy negociant to get an idea of what this means. The Vintage Ports of Quinta do Noval (including Nacional) have always been from the same vineyard. The quality of all Quinta do Noval’s wines has gone through the roof since the early 1990’s when Englishman Christian Seely was put in charge. Many changes occurred, however none have affected the production methods of Noval’s estate-produced Ports that continue to be hand picked from the ancient terraces, foot crushed and fermented in stone lagares (which Noval believes is still the best way to produce quality Port). Today, Noval’s vintage and Colheita Ports (vintage-dated Tawnies) are all made exclusively from estate-grown grapes. This contrasts radically with all of the other big names of the region who buy fruit to blend to a house style. A high percentage of the blends for Noval’s LBV, LB (vintage character) and Old Tawnies – 10, 20 and over 40 Years Old – also come from the estate.

Since the ’94 vintage, the first under Christian Seely, the Quinta do Noval Vintage Ports have always been rated amongst the best of the region, often rivalling Nacional in blind tastings. As both Robert Parker and James Suckling have noted, the Quinta do Noval 1994 Vintage Port was the best VP from the domaine for decades and each VP release since then has been outstanding. Meanwhile the Tawnies and the Late Bottle Vintage are now leaders of their respective categories. The Quinta do Noval Silval Vintage Ports (often containing the declassified Nacional and Quinta VP’s in undeclared vintages like 2005) today offer wonderful value for money.

Although most famous for its Ports, the Quinta do Noval estate is far from a mono-culture: it also produces world class red and white table wines, vegetables, herbs, olives, olive oil, oranges, figs, clementines, walnuts and pigs. We ship the wines, ports and olive oils.
In an interesting side bar reflecting Quinta do Noval’s standing in the world of wine and beyond, US President Barack Obama was possibly the first person to receive an allocation of 2008 Quinta do Noval Vintage (which we offer here!) when he was presented with a single bottle by Portuguese President Cavaco Silva at the 2008 NATO summit (2008 being the year when the US President took office). In return, President Cavaco Silva received a copy of the very first treaty signed between Portugal and the United States – you work out who got the best gift!

🍷DECANTING – Vintage Port forms a natural deposit in the bottle and should be decanted. Stand the bottle upright a few hours before decanting to allow the sediment to fall to the bottom of the bottle.

🌡SERVING TEMPERATURE – Serve at 16ºC to 18ºC. Vintage Port is best drunk one to two days after opening.

🍑🧀PAIRING SUGGESTIONS – Walnuts, blue veined and other richly flavoured cheeses are excellent accompaniments to Vintage Port; so too are dried fruits such as apricots or figs.

⏰HOW WILL IT KEEP AFTER OPENNING – Once the cork is popped

Where in the World is Quinta do Noval?

The key to the 2017 vintage is the incredibly hot, dry spring. Apart from a deluge of between 25mm and 30mm (1–1.2 inches) on July 6, there was only around 300mm (12 inches) of rain from November 2016, winter having also been relatively dry. In fact, it was so dry, Bridge told me, that the Spanish source of the Douro River dried up for the first time ever. A heat wave from June 7 to 24 saw temperatures plateau at 42–44°Celsius (107–111°F), the hottest since 1980; subsequently it was very hot but without heat spikes. Vines reacted with vigorous growth, so that from bud burst onward they remained two to three weeks ahead of the normal cycle compared to 2016. So the aforementioned rain in July occurred after and not before véraison, and this injection of vigor was transferred into the berries. It also took the sting out of the incessant heat of August; vines were able to manage any water deficiency and did not shut down. Canopies were quite small, likewise the berries and bunches, so an abundant crop was never on the cards.

Unsurprisingly, it was an early harvest, the reds picked from around August 21 until the end of September. At Taylor Fladgate, the 2017 harvest finished the same day it began in 2016. The dryness meant that sanitary conditions were near perfect. However, as already mentioned, the Port houses were looking at small yields, around 20% lower than average, Symington cropping at around 860 grams per vine or 2.5 tons per hectare and some Quintas even lower (information in the tasting notes). One unusual aspect of the 2017 vintage was the performance of the Touriga Franca. Charles Symington told me that it was the first time he had seen yields smaller than those of Touriga Nacional, and he sees this variety as a cornerstone of quality. He also pointed out Sousão as another possible unsung hero, since it tends to offer higher levels of fixed acidity, crucially imparting freshness into the concentrated 2017s. In terms of the winemaking, it was possible to ferment at lower temperatures and maximize aromatics and structure. Both David Guimaraens, head winemaker at Taylor Fladgate, and Johnny Symington compared the summer to 1945, which produced a raft of legendary Vintage Ports (even though it was so dry that they had to ship drinking water up the Douro.)

This was bottled in May 2019, about a month before tasting, but I made sure at least some of it had a lot of air. Aromatic, wonderfully fragrant and laced with eucalyptus, this then shows typical Noval focus and power. A couple of hours in a glass simply increased the power. More intense than the very fine 2016, it grips the palate and shows rather significant astringency. As wonderfully aromatic as this is, there the 2016 might have the edge. 2030 - 2075.

Noval spills over into two valleys from Pinhão to Roncão which contribute two very different terroirs to the blend, though both predominantly south-facing. It displays heady Douro aromas of open, ripe, plummy fruit with a touch of dust and eucalypt, wild and aromatic. The palate is dense, smooth and seductive on the palate with firm, schistous tannins rising on to a fresh, linear finish. Beautifully defined and integrated.

The 2017 Quinta do Noval Vintage Port was picked from August 21 to September 28 under perfect conditions. It has a tightly wound bouquet that requires a lot of aeration. Eventually it reveals fabulous, detailed aromas of cassis, bilberry jam, crushed stone and pressed violets, later hints of orange blossom and quince. The palate is pure class. Saturated tannins, wonderful structure but the headline is the intensity of fruit. I cannot remember a Noval with this penetration, almost overwhelming the senses as layers of effervescent black plum and cassis fruit segue into a spicy finish that fans out like there is no tomorrow. Is this the best Quinta do Noval ever?