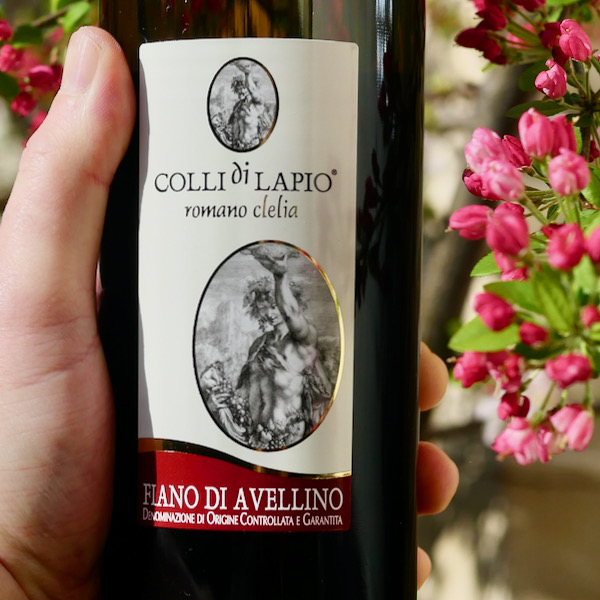 A stunning example of what Fiano is capable of. Pale lemon in colour, tears rim the glass signalling Fiano’s characteristic oily viscosity. The nose presents a dazzling aromatic display with a backdrop of white blossom, citrus, orchard and stone fruit providing contrast to more nuanced aromas of white pepper, dried herbs, flint and yeast. Times spent ageing on lees lends weight on the palate as well as savoury complexity, complementing Fiano’s natural fruitiness and zippy acidity. The finish is long and leaves the palate refreshed, with hints of lingering minerality.

Check out all of the wines by Colli di Lapio

According to Ian D’Agata’s magisterial work, “Native Wine Grapes of Italy,” Fiano is one of the country’s oldest white grapes, dating back perhaps to ancient Rome. He goes so far as to suggest that “Fiano may well be Italy’s greatest native white grape,” and Colli di Lapio “arguably Italy’s single best white wine”.

After tasting the wine, its easy to see where d’Agata is coming from. Its vibrant and full of juicy fruit to complement Fiano’s hallmark notes of smoke and dried herbs. The drive and energy is superb, yielding a wine that is both a pleasure to consider and to drink.

“One of the most positive developments in Italy’s wine scene over the last 30 years has been the total transformation of Campania. It is safe to say that Campania’s wines have never been this good, and the improvements have been due both to a plethora of new and exciting estates run by a passionate and energetic new generation and, increasingly, to moneyed locals who are looking to invest in the region’s wine economy. The presence of a number of outstanding, world-class local grape varieties that grow practically nowhere else and a better understanding of many of the region’s unique—often volcanic—terroirs have also played important roles in the transformation of Campanian wine.”

“This young estate, founded in 1994, is the source of one of the finest Fianos made today, if not the best one. The perfectly situated vineyards, at about 500 meters above sea level on highly calcareous clay soil and benefiting from wide day-night temperature differences, would rate grand cru status if such a classification scheme existed in Italy.”

Clelia Romano took over her family’s vineyards in 1994, and established the Colli di Lapio winery. A pioneer of the Campanian winemaking scene, Romano was part of an early wave of growers-turned-winemakers looking to create something of their own. Her efforts have since been met with much acclaim, and has earned Clelia the moniker La Signora del Fiano among the Italian wine press. In 2009, the influential Italian food and wine magazine Gambero Rosso named Clelia Romano’s Fiano the Best White Wine in Italy – an opinion shared many of today’s foremost wine writers.

Clelia’s estate is loacted in the village of Lapio, northeast of Avellino. The small town is the largest production center of Fiano di Avellino DOCG, and one of the few villages to boast the double denomination of Fiano DOCG and Taurasi DOCG; the two regions are known for producing outstanding wines, made from Fiano and Aglianico respectively.

Lapio has earned a reputation for world class Fiano in particular, with various critics suggesting that it would be worthy of ‘grand cru’ status, if such a system existed in Italy.

The vineyards sit around 500 metres in altitude and are well protected by the surrounding mountains, resulting in cool nights conducive to a long ripening season.

Colli di Lapio practices organic viticulture. Integrated insect and disease control is carefully monitored and only copper and sulfur-based products are used as required. However, the breezy, arid climate makes mold and mildews a rare occurrence. The estate fertilises with organic manure and grows cover crops between the vine rows; alfalfa is sown to increase nitrogen levels in the soil, then tilled in as green manure.

Colli di Lapio’s takes a traditional, low intervention approach in the cellar. All fruit comes from the the estate and is hand-harvested to ensure quality.

In the case of the Fiano di Avellino, the wine is fermented and aged in stainless steel for 8 months with 5 months on lees. At bottling, minimal sulfur is added to the wines.

Where in the World is Colli di Lapio

Colli di Lapio is located in Campania, the historical home of Italy’s wine culture. The estate is based in Lapio, about 50km northeast of Naples, and sits at the border of two of Italy’s most famous DOCG’s: Fiano di Avellino and Taurasi.