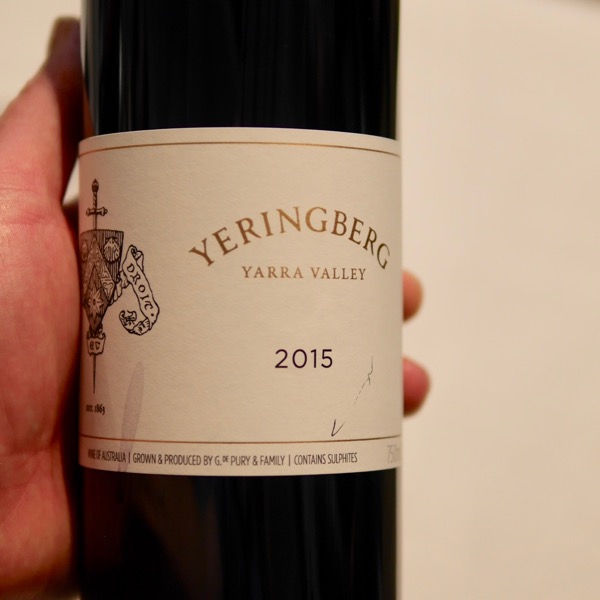 Such a beautifully layered, complex, elegant and refined wine. The tannins alone have a story to tell. Violets from extended maceration lift from the glass and that is just the beginning. I had to double take and taste it twice to capture even a portion of what was going on. Really you need a bottle, a night & a good friend to share it with to get the most from it. This will be fascinating in 5-10 years as it blossoms further. It’s fantastic that 2015 is the current release in a wine world dominate by the impatient and the bankers!

“Yarra Valley pioneers, the de Pury family are renowned for wines of finesse and elegance that epitomise the finest the region can produce. Produced from some of the oldest vines in the valley, these are long-lived wines made in tiny quantities. Yeringberg makes wines from the low-yielding vines re-established on the heart of what was one of the most famous vineyards of the nineteenth century. In the riper years, the red wines have a velvety generosity of flavour which is rarely encountered, yet never lose varietal character, while the Yeringberg White takes students of history back to Yeringberg’s fame in the nineteenth century.” James Halliday

Guill de Pury grew up beside the out-of-operation 19th-century winery in Coldstream where a lack of interest in fine table wines had caused production to cease in 1921. In 1969, Guill and wife Katherine decided to replant the vineyard and start again, and gradually restored the reputation of this great Australian estate.

Guill has since handed over chief responsibility for the wines to daughter Sandra de Pury. Sandra initially worked as a chef in Hong Kong after previous experience in kitchens and a period of study in hotel management in Switzerland. She then enrolled in an MBA program at the University of Melbourne, during which she won a scholarship to the University of Chicago. This was followed by a five-year stint as a jet-setting problem-solver with a Melbourne-based management consultancy.

Eventually, her family heritage caught up with her and she succumbed to the wine bug. She completed a degree in oenology on her way to becoming fourth-generation winemaker at Yeringberg, where she views her art as “the perfect combination of intellectual, physical and sensory engagement.”

The colour is relatively light: full red with a tinge of purple. Superb freshness and elegance, medium-bodied and delicious, complex and multi-layered. A great wine, with a magical array of flavours. All manner of berries and spices, dried flowers, dried herbs and dried fruits. Silky soft tannins. Refreshing on the finish. Not such a big fruit style, but deliciously drinkable and moreish.

At the intersection of flavour and finesse, beauty is to be found. This is an elegant, fine-fingered wine with juicy boysenberry, ripe blackcurrant, bay leaf and clove notes shimmering throughout, whispers of creamy, resiny, cedarwood oak having just-enough influence without going too far. Tannin is ripe, fine-fingered, exquisite. If you look closely you see grass, dry tobacco and peppercorn notes. It’s quite a treat.