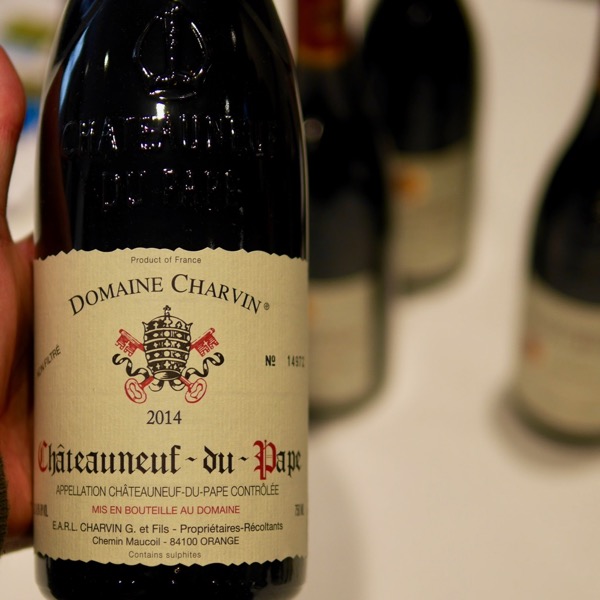 Incredibly sophisticated, the sensuality of the wine is insane. If you like quality Shiraz and feel like something different TRY THIS!

This is simply put, a brilliant wine. Incredibly lively with such vibrancy that it almost jumps out of the glass. The intensity of flavour has been tamed giving us a sophisticated beast with sensual tannins. Spices and a perfumed lift layer in and entice. This is an absolute cracker and although fuller in style would sit happily next to Rayas!

This is a powerful and restrained 2014. A wine with alluring fragrance and deep-set, red and darker berry fruits, all spliced together with a powdery, fine-cut web of old vine tannins. Superb. Drink from 2020. 95 Points jamessuckling.com

Robert Parker: “I always find Charvin’s wines come closest to those of Chateau Rayas, although the Charvin cuvees are slightly more concentrated.”

Although established in 1851, the first wines were not bottled at Charvin until a century later, in 1951, and even then they were only for the family’s private use.  Instead it wasn’t until 1990 when 6th generation Laurent took control of the Domaine from his father and began a very modest production under the Charvin label, a mere 8,000 bottles.  Since then production has steadily increased as the proportion sold off to negociants has decreased.

The Domaine consists of a little over eight hectares in three parcels in the northwestern sector of Châteauneuf, all limestone and clay soils with plenty of galets covering the soil.  Average vine age is about 45 years.  At harvest the grapes are sorted and then lightly crushed and fermented in concrete tanks with no de-stemming whatsoever.  This very traditional winemaking lasts around three weeks for fermentation and maceration, and then a further 18 months, entirely in concrete tanks for maturation.  No oak is used at all.

At bottling all of the wine is blended together and bottled unfined and unfiltered.

Apart from these 2,500 cases of Châteauneuf-du-Pape, a Cotes du Rhone is also produced from a separate holding of 16 hectares throughout the region.