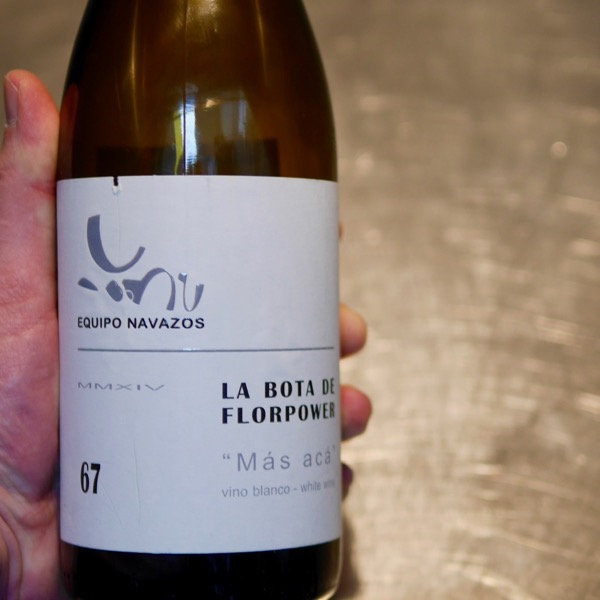 Big Brother to the Navazos-Niepoort

Bringing the very ancient into today's wine world, this is like travelling back in time, with the benefit of hindsight!

The terroir of Sanlúcar de Barrameda, the albarizas sanluqueñas of the Pago Miraflores, combined with extended aging in tank, compared to the Navazos-Niepoort, makes the Florpower a more masculine wine, earthy, savoury, and, musky with a hint of rose. Just like the Niepoort it has an incredible core of fruit, great harmony and layers of flavours that are near impossible to dissect. The texture is insanely good. You can learn more about Equipo Navazos and their search for excellence in the Wine Bites Mag Article “Equipo Navazos a wine La Botamay. Literally Mind Blowing Wine.”

This wine is made in a similar way to a Fino or Manzanilla, without, being fortified with the additional 2-2.5% alcohol. Fermentation takes place in 40 year old bota (barrels) filled 5/6ths full. After alcoholic fermentation it is racked of gross lees and returned to the Bota where it develops a fine flor (yeast layer) and it continues to mature for a further 7 months or so.  Following that time it is combined in tank for a further 12 months aging prior to bottling. The interplay between the flor, air in the barrel and the wine, protects it from oxidation and adds layers of complexity and character to the wine. The additional time in tank doing likewise.

At EQUIPO NAVAZOS we are determined to extract the full potential of biological ageing under flor at natural (unfortified) abv. It was following that path that the white Navazos-Niepoort was produced for the first time in 2008 (there are quite a few vintages out in the market by now). More recently we have started a number of experiments ageing in butt and vats, using both Palomino Fino and Pedro Ximénez sourced from different terroirs in the Sherry district and Montilla – and even other non-commercial projects in Spain’s northeast and northwest.

Along this line, in 2016 we bottled the third vintage of Florpower (MMXIV, i.e. 2014), as release number 67 of the LA BOTA series. La Bota de Florpower MMXII 67 “Más acá”, an unfortified white wine, basically follows in origin and winemaking practices La Bota de Vino Blanco MMX 44 “Florpower” and La Bota de Florpower 57 MMXII, the main difference being the 2014 vintage. Another small difference is an earlier bottling, with a shorter period of quiet ageing under flor in inox tank, after the same first period of intense biological ageing in traditional 600 liters sherry casks. That is the reason of the mention “Más acá” (below, less there), a play on words that connects with La Bota de Florpower MMX 53 “Más allá” (beyond), a wine that, inversely, was aged in barrels for a further ten months period than the “standard” releases of Florpower, Nos. 44 & 57. The wine was already showing beautifully, and we thought it was worth allowing wine lovers interested in this project the possibility to enjoy a fresher and less mature version of Florpower than previous releases. Hence we decided to do this small bottling “más acá”.

Made exclusively of Palomino Fino sourced from the blessed plot known as Pago Miraflores, it fermented in stainless steel tanks. After fermentation, it was transferred to 40 butts where it was aged under flor for 6-7 months. By June 2015 it all went to two stainless steel vats where—always under the by now much milder influence of flor yeasts—it remained until bottling from one of them in June 2016.