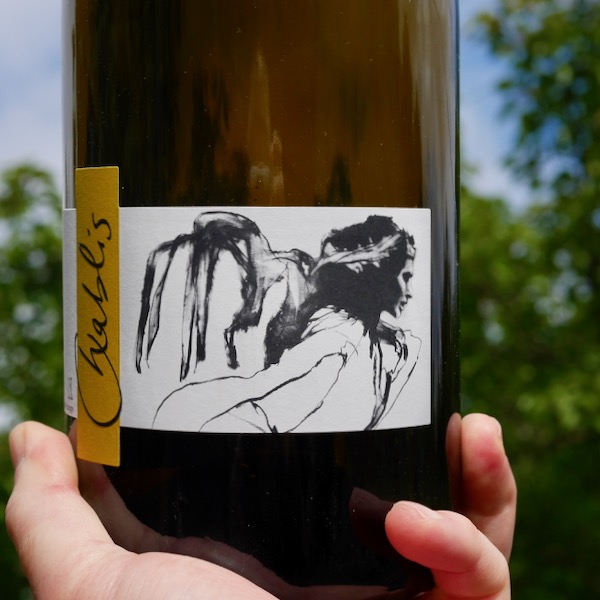 This is fascinating wine. At first glance this isn't Chablis. It is, however, what is possible in Chablis!

It takes me back to making Chardonnay at Yering Station, and, Yarra Yering in the late 90’s early 2000’s. I’d already done a vintage at Yarra Yering in 1996 when I landed at Yering Station in 1998. I’d seen what was possible with a great vineyard picked at the right time and we pulled back picking points at Yering Station with great success. Then at Yarra Yering were volumes were limited to 5 barrels rather than 300, the play was on élévage. The reserve Chardonnay at Yering Station saw around 15month in barrel. Yarra Yering’s 15-18months. Dancing with the development of wine, controlled oxidation and time is a delicate game to play. You can only do it when you have fruit of quality, lesser fruit lacks the substance and the wine will fall apart in the process. For mine, the core of fruit must remain. As it does with Pico’s wine. There’s also something a little special that happens during the second winter in barrel, the wines harmonise, become seamless, the texture more refined. They can speak more easily to you. Ask the great makers of white burg in the Côte du Beaune and they’ll concur.

You have to recognise the expense of taking this path. Any period beyond about 11months is a luxury. Why? If you empty the barrels after 11months you can use them for the following vintage. If not you have to maintain 2 sets of oak and have a cellar twice the size, a considerable cost.

These two elements, level of ripeness, and, élévage are two areas Pico is focused on. They’re reflected in the glass. His ‘Vent d’Ange’, Angels Wind, is loaded with personality. There is an ever so slight oxidative twist to the wine, it is just a complexing factor, and, the fruit core is there on show. Delicious fruit it is. Mature flavours, not over ripe, while maintaining freshness with a lacing of saline acid. Great energy, full of personality, this is a seriously good wine you can enjoy now, beautifully composed. It draws you in, whispering to you ‘Drink Me! Drink Me!’.

Serving – The wine has some fine lees in the bottle. This is not an issue at all. In fact lees protects against oxidation. For optimal drinking I recommend standing for 24-48 hours with a twist of the bottle to loosen the lees and decanting or if coming straight from the cellar opening the bottle on its side, see film. Just stick the cork screw straight through the wax seal and it’ll break away.

A Winemaker’s perspective on the ripeness of Chardonnay

After a moment of clarity, I saw an opportunity to push the boundaries harder with the Chardonnay to introduce refinement, elegance, finesse, pick earlier, preserve a fresher set of flavours and the natural acid to maintain a sense of purity.  More importantly make wine that was more suited for consumption at a shared table, with, a shared plate and a conversation.  There’s a wide band within which you can pick Chardonnay.  As the fruit rippens the sugar levels increase, the acid decreases and the flavour profile changes.  Chardonnay can be flavour ripe with only enough sugar in the fruit to produce 9.5-10% alcohol wine, at the other end of the spectrum you can pick with enough sugar, significantly lower acid and produce 14.5% alcohol wine. OK, you could argue that this is a stylist preference, it is undoubtedly a preference based on the vineyards we had access to.  For me, the ripper end borders on the ridiculous, balance goes out the window and commits the cardinal wine sin of being boring and lifeless.  You may as well attempt to make a fortified wine from it!  You can’t craft a Chardonnay in the Yarra that passes the Filthy Good Vino Tests with this profile of sugar, acid and flavour.  Doc and my vintage experience in 1996 at Yarra Yering, a cool year, with searing, excessive acidity, undoubtedly influenced these thoughts.

It’s been great to see Yarra Valley Chardonnay producers now well and truly on this band wagon producing lower alcohol, stylin’ wines.  Cool climate wines of elegance, freshness of fruit, both red and white, made with an emphasis on texture and complexity are the norm, not the exception 10 years down the track! Wines that are best consumed at a shared table with a plate of something delicious to munch on.

VINEYARD Planted on the hillsdies of Courgis. Vines were planted in 1951. (4 ha)

VITICULTURE Pico has a program of strict yield control and a commitment to organic Viticulture. He harvests everything by hand, with hand sorting of any imperfect berries at the winery on a vibrating table de trie.

VINIFICATION Fermented and aged in a combination of stainless steel (2/3) and concrete eggs (1/3).

William Kelley, The Wine Advocate: Thomas Pico’s priority is to achieve moderate yields and full maturity. He picks rather later than most of his neighbours, judging the moment to harvest by flavour and appearance rather than laboratory analyses. Fermentation occurs in neutral wood, concrete and stainless steel varying, like its duration, by cuvée and vintage. Confronted by the tiny crops of 2016 and 2017, Pico elected to retain some of his 2015s for a later bottling, keeping them on the lees in tank for longer, an experiment he had long wanted to make. Pico is extending the Mise Tardive designation and approach to several other cuvées. There isn’t really anything else like these wines in Chablis – imagine if the Mâconnais’s Domaine Valette made wines here and you’ll get a partial idea of what they’re like – but they’re undeniably delicious, indeed thrilling, in their alliance of texture and saline nuance.

Jamie Goode, Wine Anorak: One of the distinctive things about his approach is the long élevage he gives his wines. The village Chablis gets 18 months minimum before bottling, while the premiers crus get 34 months. “To arrive at transparency you have to wait,” says Thomas.

Neal Martin, “One of the most exciting vignerons in Chablis. I am constantly ordering them off restaurant lists.”

Domaine Pattes Loup is one of the most exciting estates to emerge from Chablis in recent years (Pattes Loup means “wolf paws”). Thomas Pico started his tiny estate in Courgis in 2005, just outside of the village of Chablis, under the wings of his friends and fellow organic Chablisiens, Alice and Olivier de Moor. He inherited 2.4 hectares of vines from his family’s estate, which historically produced correct, but uninspiring wines. Motivated to take a qualitative leap in a new direction, and against the wishes of his father, Thomas immediately began a program of strict yield control and a conversion to organic viticulture. This is a rarity in Chablis and a feat of extreme diligence in this often inhospitable vinegrowing region.

For a young winemaker, Pico is wise beyond his years. His drive and passion to express the soul and spirit of his land reminds of icons like Anselme Selosse. These wines are the essence of “Chablis”, but not only in their briny minerality. There is a sense of vitality to the wines, and a textured density that can only come from dedicated work in the vineyards and transparent winemaking.

Progressively, Pico has taken over more and more of his father’s vines. Today, the estate comprises 15 hectares of vineyards, all carefully and organically farmed. Fortunately, most of Pico’s vines are selection massale planted by his grandfather on the hillsides near Courgis and Preys, the two highest altitude villages in the appellation, with vineyards up to 300 meters in elevation. He is also experimenting with a rotation of cover crops to both protect against erosion, increase water retention,  and increase microorganisms in his soils.

Another distinguishing factor is Pico’s commitment to hand-harvesting, followed by hand sorting of any imperfect berries on a vibrating triage table at the winery. He ferments all wines using indigenous yeasts, does a minimum 14-16 month élévage, sometimes longer depending on the cuvées and vintages, and he bottles without fining and filtration. His AC Chablis from 55+ year old vines and up to 40% of the juice is fermented in concrete eggs with the balance in stainless steel. The Premier Crus of Côte de Jouan, Beauregard and Butteaux (from within Montmains) are from hillside vineyards between 30 and 55 years old, and are all raised in older oak.

Where in the World is Domaine Pattes Loup?

The Chablis governing body has an excellent interactive map that allows you to find producers and vineyards, zoom in and explore.

The 2018 Chablis Village was regrettably the only bottle that I could include from Thomas Pico in this report - but what a great Chablis Village, possibly the best you will find. Displaying wonderful focus and precision on the nose, this is intense and mineral-driven. Captivating. The palate is poised and full of energy and tension, achieving Premier Cru quality, with fantastic salinity on the finish. Pico at his best. Bravo.