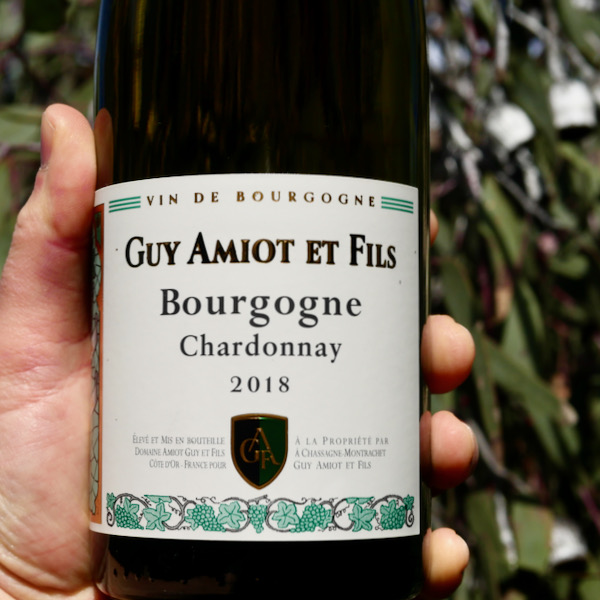 Lovers of flavourful Chardonnay will be happy here!

The fruit here comes from vineyards just to the east of the Chassagne-Montrachet village vines. The 45 years old vines are clearly contributing to the layered complexity here. Like the Vergers fro 2017 this freshened in the glass.

The bottle’s design is inspired by the original Domaine Amiot label designed in 1920 in the Art Nouveau style of the Belle Époque period. Bottling at the estate was a rare practice as winemakers sold new wine in bulk to négociants (a wine merchant who assembles the produce of smaller growers and winemakers and sells the result under its own name) but Flavie Amiot and her husband, Arsène, pioneered bottling thanks to their Parisian clientele.

With a history that goes back to 1920, the Amiot family has been rooted locally in the Chassagne-Montrachet terroir for generations. The founders, Flavie and Arsène, introduced a winegrowing tradition which was passed down to their son Pierre, then to their grandson Guy and today to the 4th generation represented by the great grandsons, Thierry (1969), Fabrice (1973), and the 5th generation embodied by Thierry’s daughter, Héloïse (1995).

The vineyard philosophy is simple, taking a common-sense practical approach keeping the harm of the environment to a minimum.

Without turning their backs on the beneficial contributions of science (analytical monitoring of the wines) and modern equipment (use of inert gas at bottling, thermo-control of the storage areas), Amiot’s methods of vinification in oak barrels remain traditional. The duration of maturation in barrels and vats extends to 20 months for the whites and 24 months for the reds to develop their aromatic structure.

Fabrice Amiot simply noted that 2018 was “a relatively easy vintage and one that gave us an abundance of fruit and, happily, in both colors. We chose to begin picking on the 6th of September and basically the fruit could not have been any cleaner. Potential alcohols were good without being particularly high with acidities that were on the lower side yet because the pHs were correct the wines actually have fine energy. In sum, I think the style of the 2018s should please pretty much everyone as there’s nothing not to like.”

Where in the World is Domaine Guy Amiot et Fils?

Domaine Guy Amiot is homed in the heart of Chassagne with holdings in Chassagne-Montrachet, Puligny-Montrachet and St-Aubin.

A whiff of petrol is present on the ripe aromas of straw, pear and soft oak. The succulent, round and reasonably vibrant flavors possess a juicy texture while offering enough depth and persistence on the agreeably dry finish to be interesting.