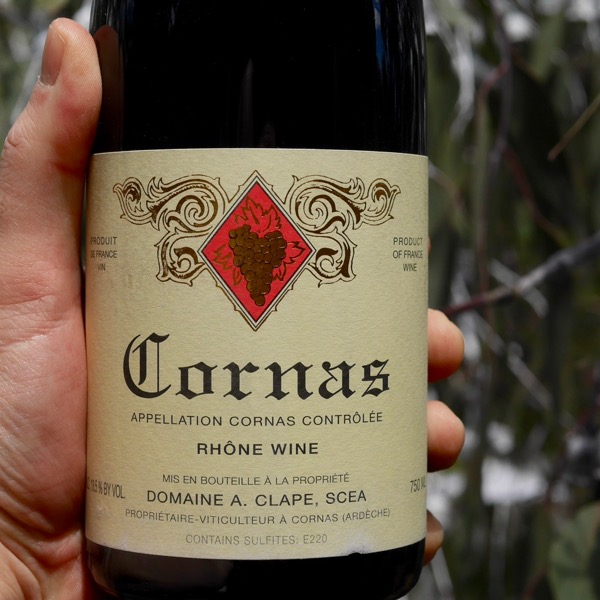 Clape’s masterpiece is, of course, the classic Cornas, precisely blended from five to six cuvées of the oldest vines in the best sites. The backbone comes from Reynard, La Côte and Sabarotte. The old vines here are la Petite Syrah—the old clone considered by many to be the true Syrah—which creates a stunningly deep and complex wine that will develop for decades.

Check out all of the wines by Auguste Clape

I will not even attempt to do more than quote Kermit Lynch, other than to say simply, Auguste Clape, Thankyou.

Even when Auguste Clape appeared in newspapers and magazines and his reputation spread worldwide, it did not change him, it did not go to his head, and he never tooted his own horn. How I loved Auguste’s humility. He wanted to make something good, something fine, something that gave people pleasure. That’s all, and that’s a lot.

His humility and honesty made tasting with him a treat. His ego never got in the way—he could be severe about one of his cuvées and so could I as we searched to define the nuances of a successful wine.

Those of you who cellared and enjoyed drinking his Cornas might also enjoy knowing that success did not alter his lifestyle. He never changed or remodeled his modest home, never judged by social status. As much as we saw each other over almost half a century, Auguste and I never wined and dined and lived it up together. Unusual. We were happy in the winery under his home, nose to glass, tasting and spitting, exploring what was in our glasses. In Vino Veritas. In Auguste Clape Veritas.

The good news for fans? Both Auguste’s son and grandson have for years worked alongside him. His skills will continue to be found in bottle.

In 1996 during my first week at Yarra Yering, Doc handed me a bottle of wine, with simple instructions, enjoy. It was a 1983 Auguste Clape Cornas. Wow! The sophistication and personality of the wine was insane. It just screamed DRINK ME! The beautiful texture, incredible depth of fruit, and, elegance. The complexity of the wine entranced. A Guiding Light in the Making of Yarra Yering Shiraz wines.

In 1999 I found myself cruising through the Rhône Valley. Dining at Le Chaudron in Hermitage, I completely miss read the menu and ordered a plate of offal, don’t get me wrong I love a little offal, but, a full plate, was a bit much. Fortunately, I had no problem with the wine list. On it the epic 1990 JL Chave Hermitage, the elegance and sophistication, married with incredible power and such beautiful tannins took me back to the 1983 Cornas from Clape. It remains in the top 10 wines I’ve ever drunk!

At the time, in Australia, when you saw this intensity of flavour it was typically in a wine that was over the top, clumsy, and with a less than pleasing texture. These two makers were doing something incredible, they were taming the beast. Moving from Death Metal to Mozart!

Producers like Clape, Chave, Allemand, Jamet, and, Paris are amongst those leading the Northern Rhône by example toward wines of as Nick Stock put’s it, “…greater depth, definition and interest across the board. Much like the Southern Rhône, refined ideals and methods elucidate this region’s fascinating and expressive terroirs. It’s something we feel very positive about.”

If you French is OK, this is worth a watch. note, the large old barrels, no double new oak here! Cement is often used for maturation.

Cornas is one of the world’s few blue-chip addresses that we still associate with traditional winemaking. For this, we can thank Auguste Clape, the village’s icon, who has demonstrated for more than half a century how to make old school Cornas of beauty, typicity and character.

Clape Cornas is the very essence of traditionally made Northern Rhône Syrah, born of the ancient clone, “la Petite Syrah,” planted in the village’s best sites, blended for balance and complexity and allowed to “make itself” as much as possible.

All of this is a result of Clape’s vast experience and open mind; he has always worked traditionally, but not bound by rules, both in the vineyard and in the cellar. As John Livingstone-Learmonth states in The Wines of the Northern Rhône, “… he is one of the few growers I have ever met who succeeds in bridging the connection between man and nature … Belief, on the one hand, listening on the other. No closed walls. The true philosopher born of the exceptional opportunity that winemaking can confer.”

Today, octogenarian Auguste continues to make the quintessential Cornas, with son Pierre-Marie and grandson Olivier at his side. Most importantly, Pierre-Marie has worked with Auguste since 1989, thoroughly absorbing his methods and philosophy, ensuring a seamless transition from one generation to the next. In fact, Pierre-Marie’s rich, two-decade “apprenticeship” reminds us of Maria-Teresa Mascarello’s years of collaboration with Bartolo.

Today’s Clape wines are greater than ever before—and not just because of the arrival of a new generation. The vineyards are obviously older and they’ve benefited from the addition of century-old Petite Syrah vines purchased from Auguste’s fellow icon, Noël Verset. Today, few French growers have a more impressive palette of crus with which to work than does Clape.

And finally, there has been the creation of lesser cuvées, which allow Clape’s flagship Cornas to have even greater depth, complexity and typicité than in the past. More than ever, Clape’s Cornas is the very definition of the appellation.

The winemaking today is of course largely unchanged. The family harvests only when the fruit is fully ripe, and the old vine fruit is not de-stemmed. The primary fermentation takes place in concrete tanks for six to seven days, followed by three to seven days of maceration to extract fine tannins.

After malolactic, ageing is in old demi-muids and piéces; there is no new oak. As Auguste Clape told author John Livingston-Learmonth, “as for ageing casks, here you need neutral wood with no tannin in it. The Syrah must breathe.”

Clape’s masterpiece is, of course, the classic Cornas, precisely blended from five to six cuvées of the oldest vines in the best sites. The backbone comes from Reynard, La Côte and Sabarotte. The old vines here are la Petite Syrah—the old clone considered by many to be the true Syrah—which creates a stunningly deep and complex wine that will develop for decades.

The Domaine now bottles three other Syrah wines as well. The least expensive, but still ageworthy, wine is the Le Vin des Amis, a blend of young-vine Cornas and Syrah grown just south of the village. Next up is the Côtes du Rhône, which includes fruit from 120-year-old vines near St. Peray and declassified Cornas.

Since 1998, a second Cornas has also been bottled: Renaissance. It’s made from 20 to 25-year-old vines on the Domaine’s best slopes as well as older vines from the lower slopes. An earlier maturing wine than the classique, it should develop for two decades.

Clape was the village’s first producer to bottle his own wine in 1957, having previously sold it in barrel to négociants such as Jaboulet. Since that time, Clape’s wine has been the essence of Syrah grown in Cornas’ suntrap of steep granite slopes—dark berries, black olive, dried herbs, woodsmoke and violets when young, developing astonishing depth, complexity and velvety texture with age.

From Josh Raynolds of Vinous

“When I tasted the 2019s and 2018s with Pierre-Marie Clape, he offered the opinion that “the 2019s have things in common with 2015 and 2010, but the tannins don’t come at you so aggressively and there’s also more freshness to them.” He thinks that the 2018s have similar qualities but noted that, in Cornas, the yield was very low, so there can be “a more backward character than you have with the 2019s, at least in this region.” Talking about aging when it comes to this domaine’s wines is amusing, and also interesting, he said, “because even in a lighter year, which we don’t seem to be getting anymore, our Cornas is good for at least 20 years, and most of the time it isn’t ready to go before it is 10 years old.”

Cornas is at the bottom of the Northern Rhône right next to Valence.

A tasting of the various lieu-dits suggest a fairly classic vintage, on the riper side but not as ripe as 2015, with well-balanced acidity and ripe tannins that are relatively approachable for this domain. Some tanks showed a little raised volatile acidity, which may show up in the final blend. They will make Renaissance this year; tanks yet to be selected at this stage, so the score is very much just an early indication. Some rain in May had Pierre Clape worried about mildew, but a few treatments with copper did the trick - there was a little on his whites but not his reds. A relaxed harvest started on the 12th of September, fermentations were long with no destemming as usual, fermented in concrete, aged in large old oak barrels. (MW)

The flagship comes largely from the Reynard lieu-dit (unquestionably one of the finest vineyards in the appellation) and the oldest vines of the estate. The lots destined for this cuvée offered another level of richness and depth, with more opulence and decadence than most recent vintages. Full-bodied, concentrated, and tannic on the palate, it’s going to require patience. The 2015 was even more tannic and backward at this stage, but there’s more than a touch of greatness in this beauty. Pierre-Marie Clape and his son Olivier continue to make some of the most impressive (as well as singular) wines in the world from their tiny cellar in Cornas. This is a bastion of traditional winemaking and the wines are not destemmed, see long fermentations, and aging in ancient barrels and casks. While they didn’t release a Renaissance cuvée in 2017 due to tiny yields, their Cornas is stunning stuff not far off what was achieved in 2010 and 2015. I suspect the 2018 will match, or exceed, the 2017.