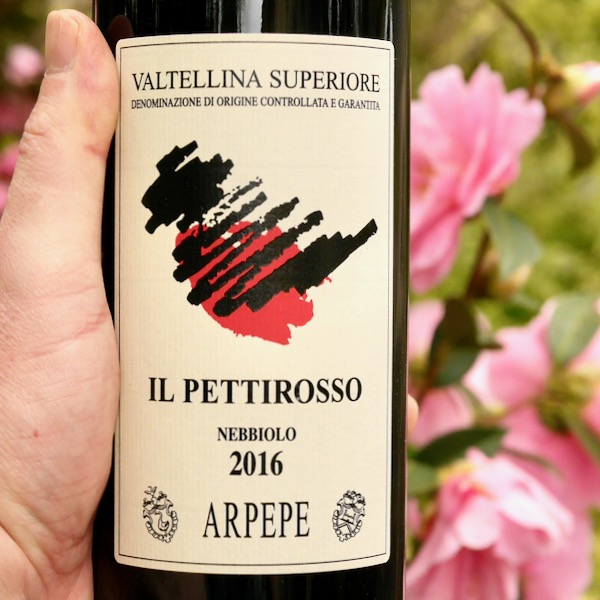 The Pettirosso is a 50:50 blend of Grumello and Sassella fruit. Boldness coming from Grumello and delicacy with fine, mineral traits from Sassella. Try the Superiores from each of the sub-regions and you’ll see these characters. The blend works beautifully. The wine has impressive depth and length. What really strikes me is the harmony. The wines are so together. Excellent acid is balanced by dark sour cherry fruit and supple fine tannins. With all of their wines they have been pushing maceraction to 100+ days and it has worked beautifully introducing complexity and refining the plush textures.

If you want to check out how this wines age grab a bottle of the Museum Release 1999. It’s a cracker! Tried it in August 2019.

The Valtellina Superiore range from Ar.pe.pe is more immediately approachable than the Riserva range (despite the Riservas being some 6 years older). The Riservas just require more time in the glass to open up. Indeed they are often better on the second or third day after opening.

Check out all of Ar.Pe.Pe’s Wines

For the first time, I had the pleasure of devouring a few wines from Ar.pe.pe earlier this year. These are vital, alive wines of grace and sophistication. Drinking them over 2-3 days revealed new, aromas and flavours with every sniff and mouthful.

Chiavennasca is a synonym for Nebbiolo. The name used in Valtellina for the variety.

The pettirosso (robin redbreast) can be found everywhere in the woods that now look down on the Valtellina, which was once under vine far higher up. Robins rarely enter the cellar, but that day one came in and alighted on an old wooden barrel, as if warning us of something. A few days later, while she was tasting the wine, Isabella noticed there was a slight leak from one of the acacia staves.

The wine appeared to be ready for bottling, but the barrel unfortunately needed replacing. There wasn’t enough to warrant a new label so she and Emanuele chose a few barrels of that ’97 – the most mature – and it became Il Pettirosso.

Arturo designed the first labels and so, to continue the family tradition, Isabella asked her husband Enrico to do it, in view of the success of the first: the Rosso di Valtellina.

On some special evenings, Il Pettirosso comes to dinner on the terraces above Sondrio, chirping merrily. Only in the case of some vintages, our cellar tastings suggest that we make a Valtellina Superiore as the unanimous expression of the three central areas of the DOCG.

The maceration and ageing are decided on the spot, almost like an actor improvising the plot of a play. It seems that the plot written by Arturo provides the perfect ground for building up the wines of tomorrow.

In 1984, Arturo Pelizzatti Perego, bolstered by the experience gained in his father’s and grandfather’s firm, decided to create ARPEPE. His aim was to realize the full potential of the unique Valtellina terroir with all the pride and determination required for such an ambitious goal. To do so, Arturo started producing long-ageing Nebbiolo wines according to the rules of the oldest traditions.

The two video’s, the first in Italian with the family, and, then of the 2017 Vintage will give you a sense of the extreme environment and dedication taken to make these wines. Beyond that just try them!

Today, Isabella (winemaker), Emanuele and Guido Pelizzatti Perego continue their father’s work as the fifth generation of winemakers and growers. In just a few years, thanks to careful technological innovations and the choice of a young and passionate team, Arturo’s dream has come true: his rare wines are once again a major point of reference on the national and international wine scene.

Given the extreme nature of the vineyards and the climate in Valtellina, all wines are not made every year. It appears that when the DOCG Riservas are made no DOCG Superiore is made. There are years when neither DOCG is made and only the DOC Rosso di Valtellina is produced.

The Vintage chart below shows just how long we have to wait between vintages of Superiore and Riserva!

Where in the World is Ar.Pe.Pe?

Piedmont is not the only Italian region to produce Nebbiolo! Valtellina Superiore is a thin horizontal strip in the very north of Italy above Milan.

Ar.Pe.Pe’s vineyards cover the Sassella, Grumello and Inferno sub-regions. Sondrio, Valtellina’s largest town is in the middle, Sassella the orange area to the left, Grumello the lime to the right and Inferno the burnt red just past Grumello.