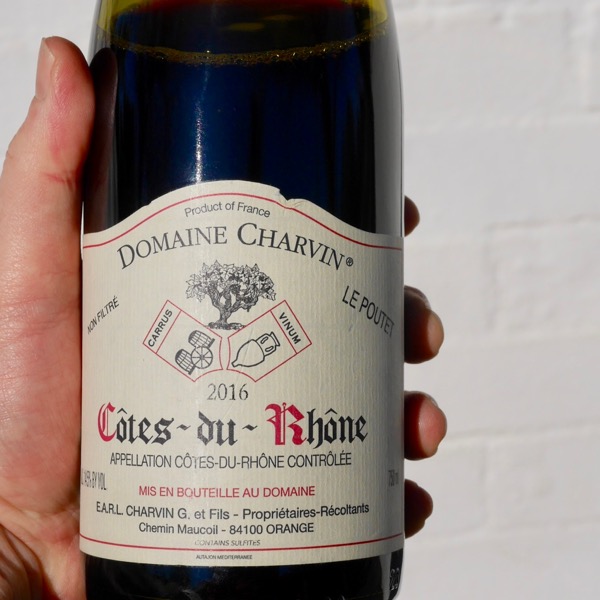 If you haven’t tried Grenache before, this is a great place to start. If you have tried it before this is a great place to finish! There is so much going on the glass, it just draws you in. Every sniff reveals a new aroma. Côtes du Rhône can be made from anywhere in the Rhône Valley, this one from Châteauneuf du Pape is made from a single site and is something special. The balance in this wine is a great indicator for the 2016 Châteauneuf du Pape vintage, fresh with great fruit density, lovely tannins and harmony. Could be another vintage of the year (pun intended).

About 80% Grenache for each wine with small amounts of Vacaresse, Mourvedre, Carignan and Bourboulenc.

This would be a perfect side by side comparison with Château de Lascaux, a Syrah Grenache from Pic-Saint-Loup.

Charvin produces finely styled Grenache based wines showing great depth and finesse (approximately 80% Grenache for each wine with small amounts of Vacaresse and Mourvedre as well as small amounts of Carignan and Bourboulenc for the Côtes du Rhône). Winemaking is traditional with no de-stemming and all ageing is done in cement tanks. No wood is used for the elevage of either wine. There are no secrets here, simply old vines, very low yields and minimal winemaking intervention. The Côtes du Rhône is regularly rated as one of the very best from this area.

Robert Parker: “I always find Charvin’s wines come closest to those of Chateau Rayas, although the Charvin cuvees are slightly more concentrated.”

Although established in 1851, the first wines were not bottled at Charvin until a century later, in 1951, and even then they were only for the family’s private use.  Instead it wasn’t until 1990 when 6th generation Laurent took control of the Domaine from his father and began a very modest production under the Charvin label, a mere 8,000 bottles.  Since then production has steadily increased as the proportion sold off to negociants has decreased.

The Domaine consists of a little over eight hectares in three parcels in the northwestern sector of Châteauneuf, all limestone and clay soils with plenty of galets covering the soil.  Average vine age is about 45 years.  At harvest the grapes are sorted and then lightly crushed and fermented in concrete tanks with no de-stemming whatsoever.  This very traditional winemaking lasts around three weeks for fermentation and maceration, and then a further 18 months, entirely in concrete tanks for maturation.  No oak is used at all.

At bottling all of the wine is blended together and bottled unfined and unfiltered.

The Cotes du Rhone is also produced from a separate holding of 16 hectares throughout the region.

A bit of History

Châteauneuf-du-Pape literally translates to “The Pope’s new castle” and, indeed, the history of this appellation is firmly entwined with papal history. In 1308, Pope Clement V, former Archbishop of Bordeaux, relocated the papacy to the town of Avignon. Clement V and subsequent “Avignon Popes” were said to be great lovers of Burgundy wines and did much to promote it during the seventy-year duration of the Avignon Papacy. At the time, wine-growing around the town of Avignon was anything but illustrious. While the Avignon Papacy did much to advance the reputation of Burgundy wines, they were also promoting viticulture of the surrounding area, more specifically the area 5–10 km (3–6 mi) north of Avignon close to the banks of the Rhône. Prior to the Avignon Papacy, viticulture of that area had been initiated and maintained by the Bishops of Avignon, largely for local consumption.

Clement V was succeeded by John XXII who, as well as Burgundy wine, regularly drank the wines from the vineyards to the north and did much to improve viticultural practices there. Under John XXII, the wines of this area came to be known as “Vin du Pape”, this term later to become Châteauneuf-du-Pape. John XXII is also responsible for erecting the famous castle which stands as a symbol for the appellation.

The Grape Varieties of Châteauneuf

Châteauneuf-du-Pape is traditionally cited as allowing thirteen grape varieties to be used, but the 2009 version of the AOC rules in fact list eighteen varieties, since blanc (white), rose (pink) and noir (black) versions of some grapes are now explicitly listed as separate varieties. Also in the previous version of the appellation rules, Grenache and Picpoul were associated with different pruning regulations in their noir and blanc versions, bringing the number of varieties previously mentioned from thirteen to fifteen.

⏳🍷Decanting: These wines love air and time in the glass. It’s worth giving it a splash in a decanter.