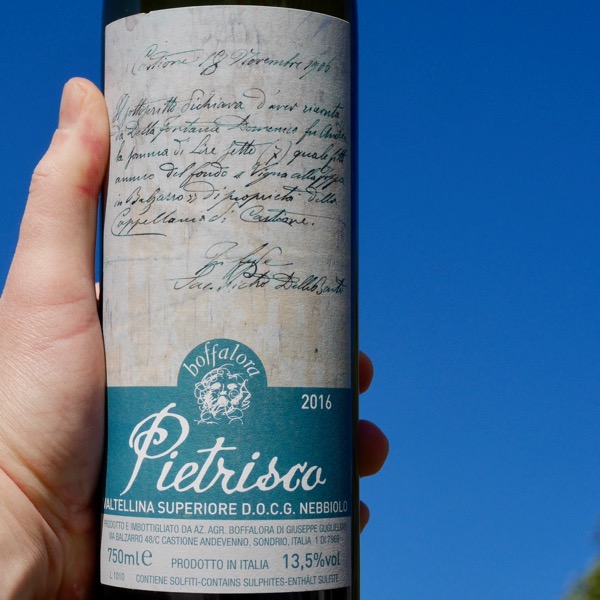 The wines of Valtellina have such incredible appeal with their elegance and perfume.

Cracking Neb! Fresh and vibrant with loads of energy. There’s a real purity to it with lovely sour cherries. It has excellent grape tannins to caress your tongue. The tannins offer front mid-palate attack in a very good way. Lovely perfume and lift to this. It’s at least of comparable quality to the Ar.Pe.Pe Valtellina Superiore’s and for mine sits between their Inferno ‘Fiame Antiche’ and Sassella ‘Stella Retiche’ in weight. The fruit marries with earth, mineral, and, woody herb. It’s just as loaded with layers of flavour and intrigue as with Ar.Pe.Pe’s wines.

Boffalora: Giuseppe Guglielmo was a mechanic and part-time beekeeper whose small stand vineyards had long been tended by his father-in-law; when the older man passed away, Guglielmo and his wife took the wine plunge in 2002, originally selling their grapes to others. The first wines under their own label came from the 2009 vintage, and here we are just a few years later, with about 10 cases of their minuscule production to share with you.

His bees help him practice integrated pest management and all farming is carried out naturally and, of course, by hand—the vineyards are so steep that he uses a funicular to transport crates of harvested grapes down the slope. The name “Boffalora” is meant to evoke the interplay of breva winds that swoop up from Lake Como in the morning and the evening tivano breezes coming down from the Alps.

From soils of sand, silt, and stone (much of it hauled up from the valley floor to construct the terraces) and harvested in late October/early November, the Nebbiolo/Chiavennasca for “Pietrisco” is fermented in stainless steel and macerated on its skins for about two weeks. It is aged in large, used oak casks for 12-15 months and then rested in tank and later bottle for about six months before release. “Pietrisco” is textbook Valtellina Nebbiolo through and through!

Where in the World is Boffalora?

Piedmont is not the only Italian region to produce Nebbiolo! Valtellina is a thin horizontal strip in the very north of Italy above Milan.

Boffalora’s vineyard is just to the west of the sub-region Sassella on the Rhaetian side, at Contrada Balzarro (municipality of Castione Andevenno).