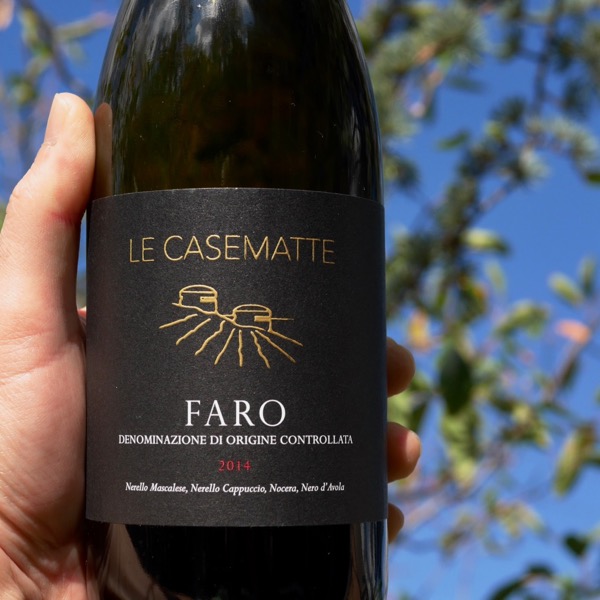 This my friend is an exercise in complexity & texture!

There’s a certain something you find with fun wine … every time you smell the glass something different leaps out at you. This is one of those wines. The textures of Nerello, a sense of austerity, with underlying generosity, so many different flavours and aromas. Like the wines from Etna, don’t expect a fruit bomb, you’ll still find some beautifully fragrant fruit playing in the glass! I’m not sure I really believe in the ‘tastes salty’ because the vineyards are near the sea, however, there is a hint of salt & chalkiness too.

Dark ruby red with orange hues, the wine has an intense, elegant and ample nose boasting notes of ripe red berries and blueberries, Mediterranean shrub, and spicy notes like nutmeg and pepper. Well-balanced on the palate with firm tannins, a round, rich fruity flavour, and an elegant finale.Pair with roasts or braised meat with mushrooms, seasoned cheeses, rich, structured dishes.

Le Casematte was named after the two casements in the vineyards that served as observatories and defensive structures during World War II. The terraced vineyards (some with a gradient of 70 degrees) are planted between 250 and 370 metres above sea level on clayey-sandy-calcareous soil. The vines here benefit from the constant sea breezes of the Messina Strait, especially the howling Sirocco wind during summer, and there are significant day/night temperature variations. This adds up to fruit rich wines with wonderful aromatic qualities that show beautiful freshness and balance with a strong sense of place.

Faro, at the northeastern tip of Sicily near the city of Messina, is literally crammed with little-known family-run wineries making lovely perfumed, medium-bodied red wines of great purity and fragrance, although the white wines here are less interesting, at least for the time being. The reds from Faro are mainly blends of Nerello Mascalese, Nerello Cappuccio and Nocera, although small percentages of other local red grapes also find their way into these wines. Strongly mineral and characterized by high but harmonious acidity, well-made Faro wines really sing on the palate and show more than a passing resemblance to the great red wines of Etna. Production volumes are small, however, and since vineyards are distributed over large areas but in small parcels, it is not likely that Faro will ever see an influx of large producers trying to cash in on the DOC’s name, as has happened with Etna.

In 2014 there were just 36 acres of vines planted in Faro making it one of the smallest DO’s. That’s exactly half the size of Yarra Yering’s vineyards alone!

Where in the world are they made?

Faro is located in the North East tip of Sicily.

The vineyard overlooking the Strait of Messina is located in Faro Superiore, the hilly village on the extreme northern edge of Sicily. The company owes its unique name to three casemates, small fortified bunkers that served as refuges for soldiers going back to World War I and World War II. These were defensive shelters that still remain on the largest plot of land used by the vineyard.

The cycle of seasons changes form and generates life just as a place changes its meaning over time. Our land witnessed dramatic moments during World War II, and today it welcomes us as a place of work, production and growth.

That sense of death brought by the war has been replaced with silent rows of vines, which often sway in the winds that come off the Strait; advantageous winds that serve to keep the fruit cool and lower the humidity.

The outstanding 2014 Faro by Le Casematte offers a very authentic taste of one of the most promising new wine regions to emerge in Sicily. At the northern tip of the island, the Faro appellation is located at a crossroads of sea currents and rapidly changing weather patterns. You get a sense of that tumultuous energy here. This is a vibrant and sassy blend of 55% Nerello Mascalese, 25% Nerello Cappuccio, 10% Nocera and 10% Nero d'Avola. It reveals cool climate aromas of wild berry, rosemary, blue flower and a touch of exotic spice. You also get those distinct aromas of caper and Mediterranean bush that remind you of Sicily. Some 7,000 bottles are made.