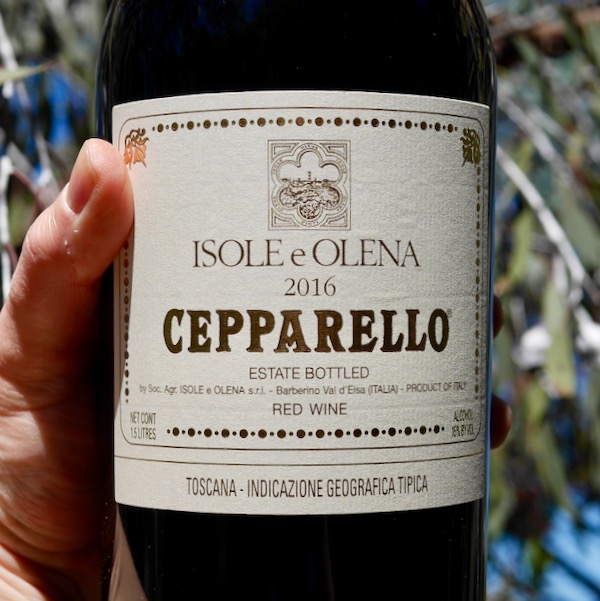 Isole e Olena's top wine. Always a pleasure. Year after year they seem to be drawing even more delicious expressions of Sangiovese from this special parcel of fruit!

‘Cepparello’ is named after the valley where the vineyard is planted. The last bottle I had of this was a 2006 a month ago, thanks Chris. It was superb, great harmony poise and balance. A real generosity to the wine. Beautiful secondary characters. Looking forward to trying the 2016. Isole e Olena is such a consistent producer. They’ve been on a roll for the last decade and beyond producing stunning wines.

Only 1 left in stock (can be backordered)

The flagship wine consists of 100% Sangiovese aged in French oak barrels. Over the years, Paolo has refined his Cepparello by giving it more air during vinification and increasing time spent in oak from 12-14 months to 18-20 months. Although De Marchi started focusing on the use of better quality oak around 1993, it is the increased age of the vineyards themselves that have given Cepparello its overall finesse. The wine is made from a top selection of the estate’s best fruits from the vineyards in Barberino Val d’Elsa in the northern part of Chianti Classico.

Paolo made his first 100% Sangiovese, Cepparello, in 1980 and had to label it as an IGT. He spent the next two decades replanting, improving the vineyards, increasing the density and restoring the terraces.

The estate is located in the centre of the Chianti hill, on the western slope. Vineyards go from 350 to 500 metres in altitude, benefitting from a cooling breeze and resulting in colder winter temperatures than the rest of Chianti. Bud break is usually earlier tha the rest of the region, and they tend to harvest late here.

Paolo doesn’t look for power but for elegance and finesse, which are the central threads running through all his wines. When praised for his achievements, he modestly replies with a twinkle in his eyes ‘I’m just trying to do what I believe in.’

The grapes for Cepparello come from the best sites on the estates. Situated 400 metres above sea level, facing south-west, soils are primarily galestro, a schistous clay. The name Cepparello is taken from an old stream, Borro Cepparello, originating in the highest point of the vineyards on the Isole e Olena estate.

After crushing, the must fermented on the skins in oak vats for about three weeks at 30-32°C, with délestage and pumping over carried out twice a day to give good colour and soft tannins. The maceration tank was emptied of the fermenting must, the cap was dried out for 4-5 hours and then the must was poured back over the cap. After malolactic fermentation, the wine was racked into barrels. It was 100% barrel-aged, a third in new French and American oak (with American barrels making up 5% of the total), a third in one year old oak and the remaining third was put into two year old oak. The wine remained in barrel for 20 months and then matured in bottle for one year before release.

Sangiovese a red Italian wine grape variety that derives its name from the Latin sanguis Jovis, “the blood of Jupiter”. It can be extremely vigourous producing leaves the size of your head and bunches of similar size with large berries.

It’s grown throughout Tuscany in the sub-regions that make up the Chianti DOCG, where the Sangiovese Piccolo is the dominant version. Plantings in Montalcino making Brunello are typically of the Sangiovese Grosso version. We use the term version as there is some funky DNA floating around that doesn’t neatly fit into Variety or Clone. It’s a case of same same but different. You’ll find it in Sicily, Calbria and splashes around the world.

Generally lighter in colour, although as always there are exceptions.

There is an incredibly diverse array of flavours and aromas across the wines made from Sangiovese. This is true across both Chianti and Brunello wines. In Chianti this is influenced by blending with the native Canaiolo, and French varietes like Syrah and Merlot  You’ll find fresh flavours like sour cherry, shifting to dark fruits, earthy characters, florals, rich chocolate, spices and beyond. The perceived density certainly differs across the wine. Like most varieties the styles that can be made are incredibly diverse.

Paolo De Marchi describes 2016 as a cool year with a lot of sunshine and well-timed rains, conditions that resulted in slow ripening of the grapes and a late, relaxed harvest that started at the end of September and wrapped up during the second half of October. As for the wines, they are simply off the charts.

“The 2016s are distinguished by their superb aromatic presence, silky tannins, layered fruit and fabulous sense of harmony. The 2016s I have tasted so far point to a high-quality vintage that may very well turn out to be profound.” Those sentiments, originally expressed after having tasted the straight Chianti Classicos very much ring true for the Riservas and other top-tier 2016s, the best of which are simply extraordinary. Near-perfect conditions with long hours of sun, well-timed rains and no excesses resulted in relaxed, drawn out harvest under warm days and cool nights, exactly the conditions in which Sangiovese thrives. Although the 2016s in this report are mostly at the mid and upper tiers of producers’ ranges, I would be remiss in not pointing out the sweet spot in 2016, and that is at the Riserva level, not Gran Selezione (which I will discuss later), but the straight Riservas, in other words the wines just above straight Chianti Classico. The best of these wines offer the consumer extraordinary quality and value.”

Where in the World do these Wines Come From?

Chianti is a sub-region of Tuscany. Other sub-regions include Montalcino and Montepuliciano. Like Montalcino, Chianti covers a large area and is relatively poorly defined in comparison to the likes of Barolo.

As is often the case with Italian wines there is confusion created by an ever changing general classification system. In this case we have wines two basic designation. The first, the Chianti Classico DOCG for which you see a black rooster on the label or neck tie which come from a defined area between Florence and Sienna. The Second Chianti DOCG or greater Chianti region that surrounds the Chianti Classico DOCG which in turn is broken up into seven sub-regions as seen in the second map below.

Isole e Olena – Is in the Chianti Classico DOCG, sub-region Barberino Val d’Elsa to the west of Radda

The 2016 Cepparello is dense, dark and also very closed in on itself. Those qualities bode well for the future, but readers will have to be patient, as the 2016 is going to need at least a few years to come into its own. Black cherry, plum, lavender, spice and new leather gradually open up in the glass, but the 2016 is not ready to show all of its cards. This fruit was brought in during the second week of October, which is pretty much optimal at Isole e Olena. The 2016 spent 20 months in French oak, with a bit less than 30% new oak, and a few months in cask prior to bottling. An explosion of floral and spice notes punctuates the super-refined finish. The 2016 is shaping up to be epic. Don't miss it!

The beautiful Isole e Olena 2016 Cepparello is a gorgeous and precise expression of Sangiovese. This is one of the icon wines of the vintage that shows a naked and transparent portrait of the grape on the one hand, with the complexity of the vintage and its territory on the other. Cepparello is like a crystal ball into the heart and soul of Sangiovese, Tuscany's mighty red grape. It is fermented in conical oak casks and later aged 20 months in 95% French and 5% American oak, of which only one-third is new wood. The wine delivers ample structure and contouring, with a firm and silky consistency at its core. Some 42,000 bottles were made. This wine should age over the better part of the next 20 years.

This is a beautiful Cepparello with transparency and verve; it opens with dark cherries, blackberries, citrus, cumin, Thai basil and eucalyptus. What really strikes you about this wine are not the first sensations of muscular tannin, nor the plush fruit suspended above darker spices — though they are all impressive — but the sudden dart of acidity on the long finish that appears seemingly from nowhere and keeps you coming back for more. Drink from 2023.