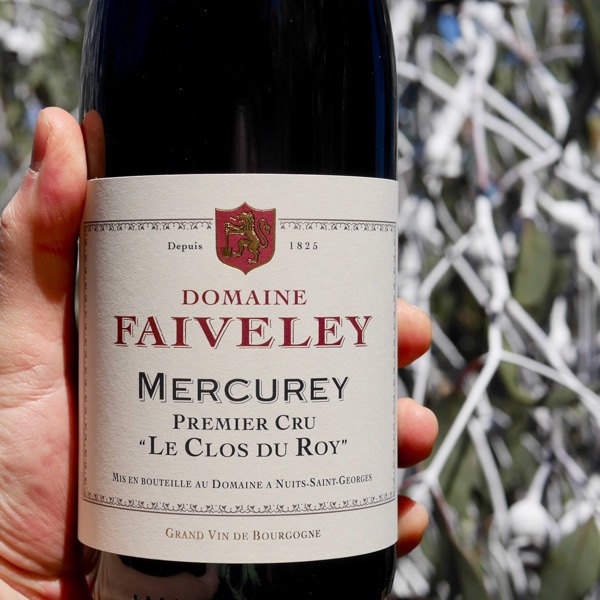 An overtly spicy and floral nose combines a touch of wood with plum, blueberry and earth nuances. There is fine intensity to the relatively refined medium weight flavors that possess good drive and evident salinity on the austere and somewhat strict finish. This will definitely need at least a few years of age as it’s presently very tightly wound.

This small parcel, known as a ‘clos’, formerly belonged to the Kings of France. It was considered as one of the appellation’s best parcels and was purchased by the Faiveley family in 1971. This wine could be compared to a Côte de Nuits village in terms of its delicate tannins and length on the palate.

The grapes are cut harvested and sorted by hand. The proportion of de-stemmed grapes and whole clusters varies depending on the vintage. The wines are pumped over twice daily in order to extract colour, tannins and aromas from the skin of the grapes. After a 15 to 19 day vatting period, the alcoholic fermentation is complete. The free-run wine is run off using a gravity system whilst the marc is pressed slowly and gently in order to extract an exceptionally pure press wine. The wines are aged for 15 months in French oak barrels (30% of which are new oak) which have been selected for their fine grain and moderate toast. The wines are left to age in our hygrometry-controlled cellars at consistent, natural temperatures.

The Evolution of Faiveley

Faiveley is one of Burgundy’s institutions. They hold an incredible 25 hectares of Grand Cru vineyard across Burgundy. Since 2012 the wines have taken on a new dimension shifting from the tannic wines of the mid 2000’s to wine of elegance, finer tannins, and, perhaps greater concentration.

The first was that a new state-of-the-art cuverie was operational. It is elegant, spacious and efficient and will offer the inestimable advantages of room to work, which is rarely the case in Burgundy’s often cramped wineries.

Faiveley noted that the 2016s were vinified in the new facility but the élevage was still on-going in the vast old cellars.

The second was arguably more important in that it heralds a change in style. Long-time readers may remember that in 2007 the Domaine made the dramatic decision to change the style of its reds, which up to that point could be fairly described as unapologetically old school. In other words, reds that were firmly structured, sturdy and built-to-age for the long-term. In 2007 this at times rustic style was discarded in favour of wines that possessed more elegance and finesse in the hopes of creating more supple burgundies that required less long-term cellaring.

“While we like the current style and what it offers, for several years we were feeling that perhaps we had strayed too far from our roots. To this end, we finally asked if there might not be a way to combine the two in a way that remained true to our history but didn’t require 20 years before the wines were completely ready to drink. So now we’re looking for more density and riper tannins while doing our best to retain a more refined mouthfeel. To achieve this we’re harvesting a few days later in the search for a higher level of phenolic maturity and then vinifying the fruit in a fashion that reduces forced extraction and emphasizes natural extraction. In other words, we will take what the fruit has to give in any given vintage without forcing more out of it that often results in overtly extracted wines.” Faiveley

Erwan Faiveley, the seventh generation owner of one of Burgundy’s largest grand cru site holders, Domaine Faiveley, is making a sharp turn away from his father’s big and tannic winemaking style. After 13 years at the helm of the family estate, the dynamic Burgundy scion confessed that it was only in 2012 that he began to achieve exactly what he wanted in terms of style and concentration.

The 2016 Vintage by Faiveley

With respect to the 2016 vintage, like many of his colleagues, Faiveley reported that “yields were super-disparate due to the capriciousness of the frost damage and volumes ranged from basically normal to almost none. We obtained good yields in the Cote Chalonnaise but almost nothing in Marsannay, Chambolle and Echézeaux. The Côte de Beaune was difficult as well and in particular Meursault though Blagny wasn’t too bad. We avoided any real damage from the subsequent severe attack of mildew though that was thanks to a lot of work in the vineyards. We began picking our lower level wines on the 24th of September and then started bringing in the 1ers and Grands Crus at the beginning of October. The fruit was very clean and definitely ripe as we had potential alcohols that came in as high as 13.7%. We used relatively low amounts of whole clusters in general but because of the tiny quantities for a few wines, we used 100%. We did a moderately soft vinification as the skins were thick and the extractions happened almost by themselves. The acidities were pretty much ideal as the average post-malo pHs matched those of the average total acidity right at 3.5. As to the wines, I am really excited about them because I honestly believe that 2016 is a great vintage that has everything that most people look for in red Burgundy”. For the last several years I have been quite impressed by the improved quality of the Faiveley wines and it continued in the 2016 vintage. In particular, their range of wines from the Côte Chalonnaise offer both excellent quality and value.

The videos below explore each of the seasons following the full cycle of the vine and wine at Domaine Faively.

Faively’s vast holdings stretch from the very top of the Côte d’Or through the Côte de Nuits, Côte de Beaune and into the top of the Côte Chalonaise with Pinot holdings in Mercurey. Below are maps of their terroirs. You can enlarge them and explore the regions and vineyards. We’re writing a series of primers on each of the main villages in Burgundy and on Burgundy in general you can check out where we’re up to in the Wine Bites Mag.

Check out all the Article on Burgundy!

Check out all the Article on Burgundy!

Gee, this is punching above its weight. Deep, slightly smoky, blackberry, raspberry, mint, spice and positive oak. Medium-bodied, fleshy and tannic, almost dark and brooding, certainly has this sense of earth/minerality and graphite tannin. Finish is rich in tannin, black tea, and length with a firm pulse. Rolling. In short, bloody good. Perhaps give it a couple of years yet, mind you. Love this.

Note: vinified with 25 to 30% whole cluster. An overtly spicy and floral nose combines a touch of wood with plum, blueberry and earth nuances. There is fine intensity to the relatively refined medium weight flavors that possess good drive and evident salinity on the austere and somewhat strict finish. This will definitely need at least a few years of age as it’s presently very tightly wound.