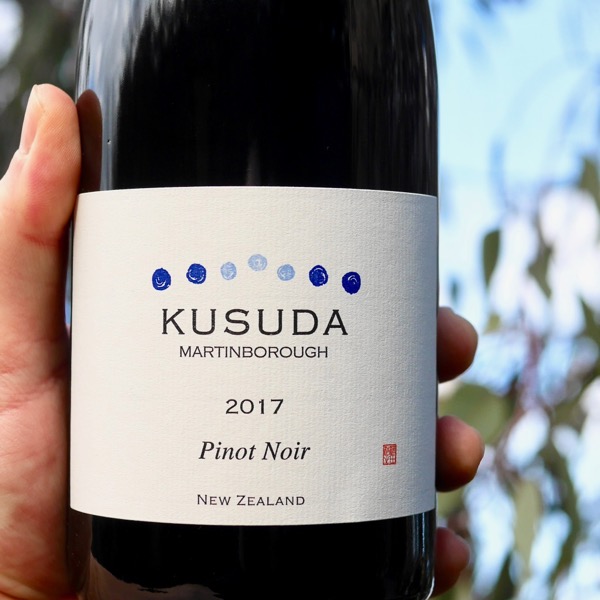 ‘From the high-density block (majority 7400 plants/ha) we started to lease in 2011 then purchased after the 2015 vintage. 2nd Pinot Noir made from own vineyard. 90% de-stemmed, cold soaked for 4 to 7 days.’ Hiro Kusuda

Hiroyuki Kusuda’s Martinborough vineyard has 1.6 ha of Pinot Noir, 1.2 of Syrah and even less Riesling. ‘Hand-crafted’ was never more appropriate a descirption. The now ‘famous/infamous’ vintage regime involves picking each berry individually when it is at perfect ripeness, necessitating several fastidious passes through the vines.

Milton Wordley has an insightful interview with Hiro on his site ‘People of Wine’. When you read of the insane detail Hiro goes to select berry by berry, you’ll truly realise this wine is a labour of love.

This is so small an operation, entirely worked by the Kusudas, with a little help from Japanese friends who fly in to help with the vintage, that it could almost be called bonsai. The total production of Kusuda Wines in Martinborough is but a few hundred cases of Syrah and Pinot Noir a year. JANCIS ROBINSON MW

In the North Island I came across the utterly different yet equally remarkable Pinot Noirs of Kusuda Wines. Here again, I tasted sheer remarkableness. Owner-winemaker Hiroyuki Kusuda, born and raised in Japan and now residing in New Zealand, is obsessed with extreme berry selection. Kusuda brings in 50 Japanese pickers at harvest, and he described (and displayed photographs of) the most rigorous and extreme berry-sorting that I’ve ever heard of. The result? Suffice it to say that you can taste the difference. The future! MATT KRAMER, The Wine Spectator.

Having exhausted his savings during his four years at Geisenheim, Kusuda leased an unirrigated pinot vine yard near Martinborough, and made the first vintage (and all subsequent vintages) at the Schubert Winery in 2002. While pinot noir remains the principal focus, he makes a similar amount of syrah (3000 to 4000 bottles of each if the vintage is kind), and made his first riesling in 2009. It is here his Japanese army comes into play: every year 20 to 30 friends fly in from Japan at their own expense. One tonne of pinot grapes will typically take two days to hand-pick and thereafter undergo a berry-by-berry inspection (after passing through the destemmer). Even the slightest imperfection will result in rejection; the true cost of production is many times the price of the wine. JAMES HALLIDAY