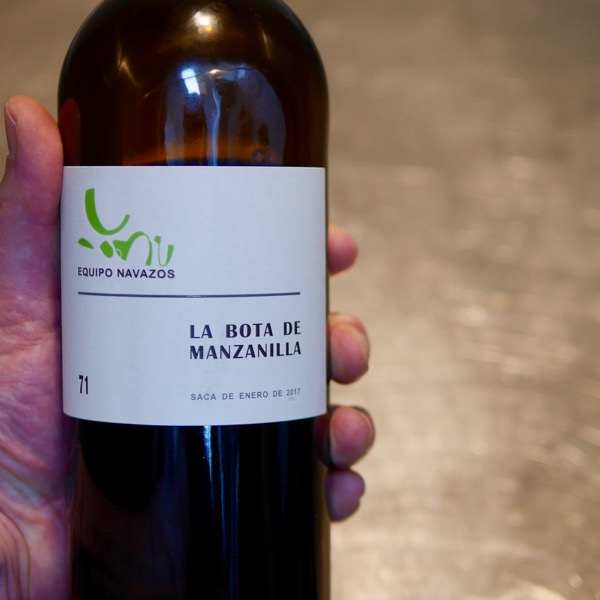 If "I Think" is entry level Manzanilla, La Bota de Manzanilla No.71, has an IQ heading towards 180!

Taking Manzanilla to it's most mature stage before it becomes a “Pasada” La Bota 71 has seen 7 years in cask. As with all La Bota wines it is unfiltered, and, the vibrancy of such careful treatment shows. The extra development compared with “I Think” offers a step up in richness and complexity. The fragrance, spice, nuttiness and depth of the wine support by a perfectly balanced alcohol drive.

You can learn more about Equipo Navazos and their search for excellence in the Wine Bites Mag Article “Equipo Navazos a wine La Botamay. Literally Mind Blowing Wine.”

Manzanilla, is much the same as Fino, produced and matured only from the area around Sanlúcar de Barrameda. The Solera system is often run in a slightly different way. The climate of the area, close by the sea encourages a thicker layer of flor yeasts on the wine, reducing the rate of oxidation & glycerol production (glycerol is an alcohol that give rounder mouthfeel). The wines tend to be fresher, and finer than their fino counterparts and exhibit a certain saltiness that arguably comes from it’s proximity to salt water.

This is the eighth release of La Bota de Manzanilla de EQUIPO NAVAZOS, all of them with a pure Sanlúcar character, which this time we have sourced from a different place in order to retake with even more enthusiasm the authenticity of the original style of our manzanilla.

It has been very helpful the fact that we have had access to several dozens of toneles and botas of outworldly quality, casks that have been carefully put apart and looked after by Eduardo Ojeda and his team along one decade, since they arrived to Sanlúcar in January 2007. The estimated average age of this manzanilla is seven years.

Showing a well settled and profound profile as well as salty and cheerful vibrancy, La Bota de Manzanilla No.71 is an unbeatable match on the dinner table. It excels with dishes from the Spanish seafood tradition: mackerel potatoes, tuna stew, oven preparations and boiled shellfish; and international cuisine: toro sashimi, marinated herrings, mussels. It has been bottled after only the slightest filtration in order to preserve its genuine character and its deep golden color with green hues as if straight from the butt.

It is advisable to handle this manzanilla with just as much care as any other great white wine. It should be served at about 9/11ºC in fairly large stemware, never in the cliché copita.