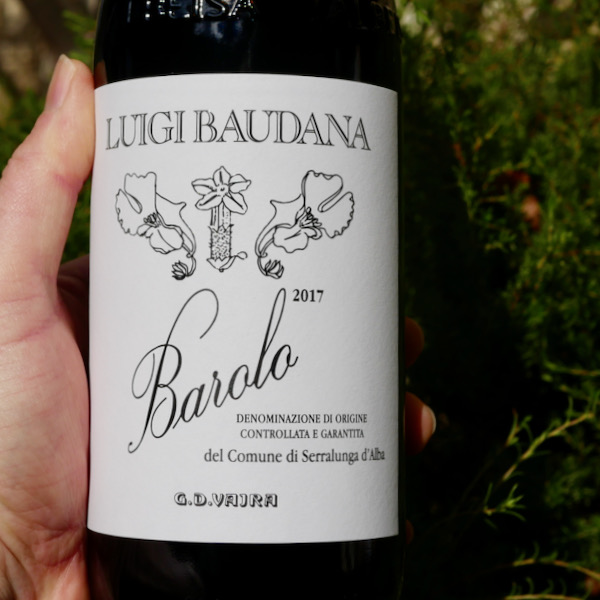 The 2017 Barolo del Comune di Serralunga d’Alba may very well turn out to be one of the best wines of the year in its peer group. Dark and wonderfully expressive, yet also light on its feet for a Serralunga Barolo, the 2017 has so much going on. Black cherry, plum, spice, gravel, cured meats, lavender and sage all meld together in this dark yet translucent Barolo.

Check out all of the wines by Luigi Baudana

Combining the characteristics of both the Cerretta and Baudana vineyards, this Barolo is well balanced and can be appreciated at a younger age. Here, a pleasantry and smoothness is married with the austerity and character of the Helvation soils. In drinking this wine, it’s like walking you through this legendary hill of Serralunga d’Alba.

Enriched by complex sensations of spices and liquorice, at the taste this Barolo is warm and soft, with a well-rounded body and refined tannins. The structure is the one of Serralunga, powerful and elegant in all its forms.

These Nebbiolo vineyards are located in Serralunga with slightly varying soil compositions. An average altitude of 340m and vines aged between 20 and 30 years complete the identity of this wine. The harvest takes place in the second half of October, enjoying till the last moment the rich nourishment the soil offers. The grapes are sorted by hand. Fermentation usually lasts 25 days before the wine is moved into large casks for ageing. – Giuseppe Vaira

We had the great fortune to spend an afternoon with Guiseppe this year. His passion, and, his families passion, thoughtful, and, humble approach to their work is inspiring.

Listen to 🎧Giusseppe explore the history of Barolo, the estate, and, the wines.

Luigi Baudana is one of the smallest active wineries in Serralunga d’Alba and the entire Barolo region. With only 2,6 hectares (6.4 acres) farmed in some of the prime crus of the village, this can rightly be considered a true garagiste producer.

After 30 years running the winery, and without heirs to take over the business, Luigi and Fiorina Baudana took the difficult decision to sell. Because of the location of the vineyards, in the heart of the ‘golden mile’ of Barolo, Luigi and Fiorina were offered some eye-watering sums of money. They were concerned, however, that the name and estate should continue as is, rather than be absorbed into a larger entity.

As part of his research, Luigi visited the Vajra winery incognito one day, and was so impressed with the way they dealt with people and communicated their philosophy, that he rang Aldo soon afterwards to ask if he would be interested in buying the estate. A deal was soon done, and the Vajra family have run this estate alongside Luigi and Fiorina ever since. We have tasted the wines every year and watched them improve. The depth of flavour and intensity that comes from the vineyards has remained, but the Vajra touch in the cellar has brought them to a new level.

It was 2009 when Luigi Baudana entrusted the Vaira family with his historical vines in Serralunga d’Alba. For the Vairas, it was a dream come true; Aldo had always loved Barolo from the Helvetian soils of the area, and felt honoured to have the chance to better understand and work this land. With their love of a challenge, the Vaira family jumped at the chance to start a new adventure. Cerretta and Baudana rival the very best single-cru Barolo of the region. The range also features a Barolo that flies the flag for the Serralunga commune.

For over 30 years, Luigi and his wife Fiorina carried on the family’s heritage in Serralunga d’Alba.
They cared for their vineyards with the same tenderness of their own love.

2017 will be remembered as hot with low rainfall. Winter was mild, while spring brought some rain and above-average temperatures. May saw the beginning of a long period of fine weather with summer maximums above average, though cooler nights than in other hot years.

End of August and early September, some welcome rain arrived, followed by a sharp drop in temperatures and marked diurnal temperature shifts. The later ripening nebbiolo and barbera benefitted most. While the overall growing season was shorter, it still lasted on average 185 days compared with 170 in other ‘hot’ years, and 200 in classic vintages.

The accumulation of anthocyanins and tannins was excellent, and while alcohols are higher, they are not out of the average, especially for nebbiolo. Ph levels were good and acids lower. Yields were below average of compact bunches, with harvest occurring around 2 weeks early.

2017 yielded wines of great promise – the cool nights and return to ‘average’ conditions in September being major contributing factors. In fact the 2017 Barolos show remarkable freshness and elegance, with the top producers building on their experience of warmer years, which began with the torrid 2003.

Galloni does an excellent job exploring the 2017 growing season and vintage in his article “2017 Barolo: Here We Go Again…” It’s clear the growers and makers of Piedmont have got their heads around warmer vintages and how to get the most in both the vineyard, and, the winery.

“There is plenty to like about the 2017 Barolos… In tasting, the 2017s are mid-weight Barolos with the classic structure of Nebbiolo. They are often intensely aromatic. Acids and tannins are prominent in many wines. The fruit profiles are ripe, often distinctly redtoned, but not cooked or over-ripe. Perhaps most importantly, the 2017 Barolos are very true to site, which is always a concern with vintages marked by warm weather. The best 2017s are exceptionally polished, vivid and flat-out delicious”

Where in the World is Baudana?

The Commune of Serralunga runs in a strip along the eastern side of the region. The vineyards of Baudana & Cerretta are in the top half the Commune.

The Luigi Baudana 2017 Barolo del Comune di Serralunga d'Alba reveals a robust and fruit-forward bouquet, with pressed blackberry and plum, followed by licorice, iron ore and some of the candied orange aromas that often come with fruit from Serralunga d'Alba. The wine is tight in terms of structure, and you feel its strength, but ultimately the sensations are polished and smooth. There are no rough edges to these well-managed tannins, and this is especially impressive in an unruly vintage such as 2017.

The 2017 Barolo del Comune di Serralunga d’Alba may very well turn out to be one of the best wines of the year in its peer group. Dark and wonderfully expressive, yet also light on its feet for a Serralunga Barolo, the 2017 has so much going on. Black cherry, plum, spice, gravel, cured meats, lavender and sage all meld together in this dark yet translucent Barolo.