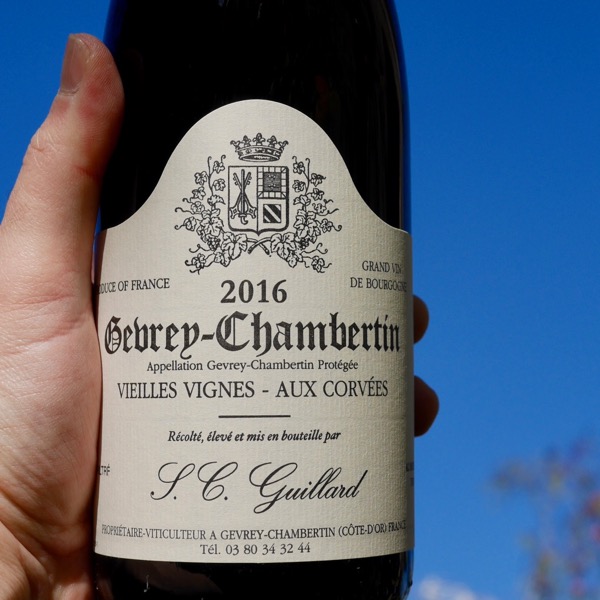 Layers of concentrated fruit and a refined texture this is a superb effort full of personality!

A fuller ‘village’ than the Reniard, still incredibly sophisticated, dark cherry fruit, rich and round, with a lovely line of acid. That mouthfeel again! Excellent rendition. Bang on. Poised just delicious. Such concentration of fruit. Drink 2025-2038

The honesty of the Guillard wines is striking. The fruit has serious depth and length, the tannins great quality. When young, they can appear very tightly wound. I’m looking forward to seeing the 15’s. The base level 2014 Vielles-Vignes Aux Corvée has just started to hit it’s straps. 6 months ago (Jan 2016) it was tight and lean now it’s starting to deliver an earthy opulent fruit and the acid is balanced long and fine definitely some classic Gevrey characters coming through. Great density and length of fruit I can see now why they are happy with the perceived higher acid when the wine is younger. As the wine has settled the acid is helping to tame the incredible richness of some superb fruit, bring the wine into balance as it matures gracefully.

Tom, who with his partner Nadege imports the wine, found the Domaine by accident in 1992 when he did his first vintage in Burgundy and we have been going back regularly since then. Sometimes they were lucky enough to find Michel in his cellar and managed to buy some wine.

After many years of buying his wines, they managed to convince Monsieur Guillard to let them import a few bottles to Australia.

The Domaine was created by Michel’s Grand-mother, Jeanne Lyonnet    Born in 1882, she lived and worked in Gevrey as a maid.  She married in 1909 but soon after her wedding, her new husband Auguste had to go to war. She worked hard and saved enough money to buy her first few vines in 1913. When Auguste nicknamed Henri IV  came back from the war, he worked as a labourer for some big Gevrey Domaines.

In 1937 after much sacrifice, they bought their first piece of premier cru, Les Corbeaux.

In 1958 their only daughter and her husband André Guillard took over the Domaine, adding to the few vineyards already purchased. However, they still had to maintain a second job as labourers to sustain the family business.

Finally, Michel and his sister Odette, upon retirement of their parents, took over in 1979.

Both generations added slowly to the estate, but Michel speaks with great admiration and devotion about his dedicated grandmother who has been able, by pure hard work and determination to be a landowner, in what would have been an unusual occurrence in those days, a house cleaner buying a vineyard in one of the most sought after village of Burgundy!

So far I’ve described the reds from 2017 as playful, vibrant and energetic with supple tannins. Across a number of villages the flavours, fruit weight and textures have been appealing and enticing. As usual, you have to play the wine, not the vintage! A great producer optimises every year. Neal’s call on optimal yield reflects my experience making wine. Well balanced, mature vine, treated well thrive when producing an appropriate crop.

It’s becoming harder to compare vintages in Burgundy to those of the past and makers are noting changes in the timing of key phenological stages like bud-burst, véraison, and, picking time. The composition of key elements, like acids, in the grapes appear to be changing, winemakers are employing many more simple yet important techniques like sorting tables, and, the generational shift that pushed through in the late 1990’s has matured, building confidence in their grapegrowing and winemaking. It’s an exciting time to watch Burgundy!

In some ways, the 2017s are “default” wines. After the trials and tribulations of recent years, this season often reminds me what these multitudinous climats should taste like. As nearly every winemaker opined, 2017 is a vintage that distinguishes one vineyard and/or one terroir from another with satisfying clarity. The growing season did not leave such a heavy imprimatur upon the wines as others, including 2015 and 2016. Wines are governed more by the DNA of each vineyard and then sculpted by winemakers’ decisions.

Rumours abound that the 2017 reds are relatively light and that they lack the concentration of 2015 due to fewer solar hours and less heat, or the concentration of 2016, where frost-affected vineyards could focus energy and accrete sugar within fewer surviving bunches. This stems from the idea that low yields are a prerequisite for concentrated wines, but that is only partially true. Why? Firstly, this report focuses on la crème de la crème, and at this level, winemakers have the wherewithal to control yields through green harvesting and/or are blessed with naturally less vigorous old vines. Gathering figures for yields directly from winemakers, within the purview of this report, 2017 is a regular crop rather than an excessive one. Perhaps we are used to reduced yields and have begun treating them as the norm. We should focus more upon the optimal yield subject to the vagaries of the growing season and individual terroirs. Optimal yields were achieved by many domaines in 2017. Secondly, for sure, it was an early harvest. But it followed an early bud-burst, which means the hang time necessary to impart complexity and reach phenolic ripeness was obtainable. Thirdly, many of the berries had low skin-to-juice ratios (unlike in 2018) and thick skins that provided ample tannic backbone.

Generally, whilst the 2017 reds might not be as concentrated as the previous two vintages, there is no way you can claim the wines are light. Not only are they imbued with real fruit intensity, but they also seem to be gaining density during their élevage, especially after their malolactic fermentation, as they enter their final months in barrel. Neal Martin