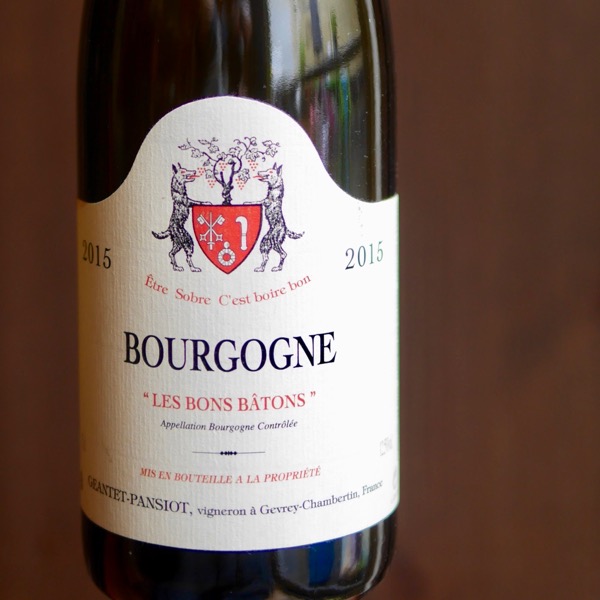 Lovely purity depth and length. Vincent is certainly making vibrant, expressive wines, fruit leaps out of the glass. Supple and punching above it's weight.

This is one of those sneaky wines, everything is there, ready to explode. Open a couple of days and it starts to come together. Age it a few years and you’ll really see the rewards. So easy to hoover! Lovely flowers. Les Bons Bâtons is less than two acres in size and sits just across the main road from the Chambolle-Musigny.

Another example of why it’s important to know where the fruit for a Bourgogne comes from. Read the Wine Bites Mag article “Getting Your Head Around Burgundy Part 1 – Vineyards, Classifications & Villages” for more.

I first tried Domaine Géantet-Pansiot only recently, a simple 2014 Bourgogne. It had the hallmarks of well made wine, harmony, supple texture, fine line and length appropriate for a Bourgogne. Seeing the potential I sort a bracket of 2015’s to try, the Bourgogne Le Bons Bâtrons Rouge, Gevrey Chambertin 1er Cru Champeaux, and, Chambolle Musigny 1er Cru Les Baudes. Co-incidentally at a blind tasting of 12 x Charmes-Chambertins, Géantet-Pansiot 2010 was in the mix.

After trying these there are some common threads. Vincent’s wines are vibrant, lively wines, of great purity, supple tannins, harmony, with a lick of very subtle oak. They walk the line between modern and traditional beautifully.

I’ll be fascinated to watch the 2015’s develop.

The Domaine Géantet Pansiot in Burgundy is currently run by Vincent Géantet, who is the third generation of vignerons in his family, though the vineyards and even winery buildings have changed with each new generation, as a result of inheritance laws covering a widespread family. His daughter, Emilie, continues the tradition having set up on her own while son, Fabien, has been working alongside his father since the age of 12. Edmond Géantet began domaine bottling in 1955. Vincent joined his father in 1977, taking full charge in 1989.

The vineyards are run according to lutte raisonée, with no herbicides, just one or two anti-disease chemical treatments. The grapes are sorted on three tables de tri, the last of which is done berry by berry, after destemming. The uncrushed berries are cooled to 10°C for 10 days, then warmed to 22°C for fermentation to start. The tanks are punched down once and pumped over once a day, after which the solids are given a light pressing and all the juice is left to settle for a week, so that any last sugar emerging from the pressed skins can finish fermenting. The wines are then matured in barrel for 15 months, with a couple of stirrings but no racking. 30% new wood is used on every cuvée, from Bourgogne Rouge to Charmes-Chambertin.

The Géantets now exploit 12 hectares, much of it with farming contracts. Half of this is village Gevrey Chambertin and a further three and a bit hectares generic Burgundy. A small cuvée of Ladoix has been added in 2007.

Vincent Geantet’s son Fabien described 2015 as a vintage that was “relatively easy to manage as there were no real problems and given the hot and dry conditions, not much disease pressure either. We picked from the 7th of September up to the 20th where we picked our parcel in the Hautes Côtes. The fruit was super clean and quite ripe so there was no need for chaptalization. Unlike 2014 where we used some whole clusters for a few wines, we used none in 2015. I was frankly afraid that we might make another 2009 with lower acid and slightly ponderous wines but the 2015s don’t resemble them at all, in fact they are remarkably fresh, well-balanced and represent clearly the underlying terroir. I like them quite a bit.”