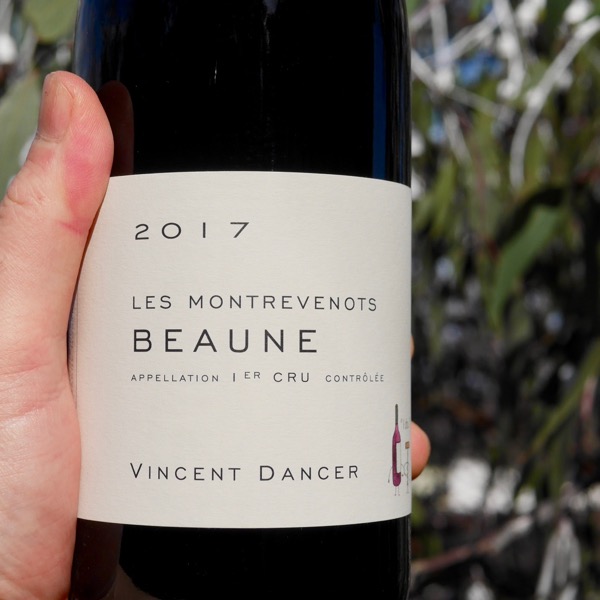 This vineyard sits high on the edge of Pommard above Clos des Mouches. It’s a south-facing, cool, rocky slope and Dancer’s parcel was planted in 1996. The white clay and rocky soils here brings this red more lift and structure. The 2017 is oh so seductive with a succulent, fleshy texture; floral and red-fruited perfume; and a vibrant, juicy close.

It’s well worth exploring Vincent’s website, a photo blog, that captures the life of a vigneron.

“We still regard him [Vincent Dancer] as the most talented and meticulous of all the winemakers of his generation, producing wines that uphold but also update the canons of Burgundian classicism.” Bettane & Desseauve’s Guide to the Wines of France

The tiny drawing on the label is there to remind us to not just look at the bottles, but to drink them!

Outside of France, Vincent Dancer is known almost exclusively for his whites. As the reds rarely leave French shores, and are made in tiny quantities, this is perfectly understandable. In fact the Domaine only exports 30-odd per cent of its total wine, and Dancer’s red terroirs total just 1.8 hectares. Add to this the lousy yields of recent years and you start to understand how rare the red wines of this producer might have been. Nonetheless, we’ve long been admirers of Dancer’s wonderful and very fairly priced reds and we have repeatedly requested an allocation. To this Dancer has always responded that when the time was right, namely when he had a vintage that allowed him to produce some more volume, he would indeed oblige us. This was something we looked forward to. Dancer has been working very hard behind the scenes, in both the vineyard and the cellar, to raise the quality of his red wines to match those of his revered whites.

Vincent Dancer grew up in Alsace, where he inherited a love of wine and photography from his father. After studying engineering, his father suggested that Vincent spend some time in Burgundy, where his family owned some vines that were being rented out to cousins. Dancer was immediately hooked, and decided to settle in Chassagne-Montrachet and make wine from the five hectares of well-situated vineyards. The winery is small even by the standards of Burgundy, and despite Dancer’s reclusive nature, the wines are well known to a small circle of restaurateurs and wine-lovers who reliably take their miniscule allocation year after year.

Dancer was the first producer in Chassagne to become certified organic, and there remain less than a handful of others. He remains quietly individualistic, creating his own lean, bright, and savory style of winemaking, trusting his instincts and experience to make the best possible wine in his own way, Each cuvée, however, is truly a reflection of the terroir — from the rich, unctuous Meursault Perrieres to the incisively fresh Chassagne Tete-du-Clos.

Where in the World is Les Montrevenots?

The 1er Cru Les Montrevenots is on the southern boundary of the village of Beaune right next to Pommard immediately above 1er Le Clos des Mouches.