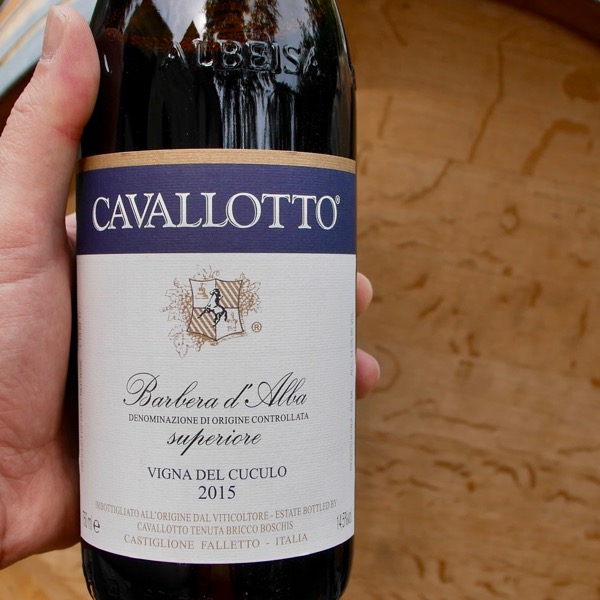 Plush, plump, fresh, vibrant, luscious fruit, with juicy acid that sits beautifully in the wine. Will be delicious with food, so typical of the variety. Hallmark Cavallotto layering, with layers of tannin, and, flavour, considerably complexity, Lovely earthiness, red berry fruits, With great depth and length, wrapped, in layers of spice, and just a hint of earthiness. This shows just how good Barbera can be! Seamless, harmonious, beautiful.

How these guys have flown under the radar for so long is beyond me! The vineyards, the wisdom expressed in their growing and making, the personality in the wines just make me happy!

From the importer: Cavallotto’s Vigna Cuculo is a major league Barbera and comes from a parcel of 50+-year-old vines on the western side of Bricco Boschis. This parcel of vines is named after the Cuckoo bird or Cuculo. We’re not sure why and neither is Alfio Cavallotto. The unique stature of this wine can, again, be attributed to the mature vines, low yields and powerful terroir of the Bricco Boschis. The western aspect and the preponderance of limestone in the soil here, tempers Barbera’s natural acidity, although the ’15 remains super bright. The ageing of the wine, too, is distinctive, with the fermenting must having spent 15 days on skins (a long time for Barbera) – this maceration bringing out fine structure and length. The wine is aged for 24 months in the same, aged Slavonian botti as the Nebbiolo wines, so it has none of the toasty new oak that blights many a Barbera. 2015 was a wonderful vintage for Barbera and Dolcetto and, as the note below makes clear, this is a vibrant but layered example, packed full of blueberry and plum, roasted almond aromas and flavours and a punchy, savoury close.

When you unearth the history of Cavallotto, all the elements are there, great sites, high planting density, balanced healthy vineyards with moderate crops, now farmed organically.

Two additional elements take their wines to the next level, vine age, continuity of farmers with the retention of wisdom it offers! This is, and, has always been a family business, knowledge built on, and, passed from generation to generation.

Common threads run through Cavallotto’s wines, from their Dolcetto, to their Barbera, and, Nebbiolo’s, Langhe, Barolo Bricco Boschis, and, Barolo Riserva from Vigna San Guiseppe and Vigna Vignolo.

They are focused on purity of fruit, without the interference of oak, complexity, and, are one of the best examples off carefully considered élévage on the market. All of this results in wines of great expression and vibrancy.

Earlier this week I tasted, read drank, 12 x 2010 Baroli. Reflecting on the mix, there was a distinction between modern and traditional styles, perhaps less obvious than you would have seen 10 years ago, none the less it was there. The most modern of styles tended to have darker colour, less complexity, more new oak, look slightly more clinical and clean, not having the personality of the more traditional wines which tended to have great harmony, complexity, and, more intrigue. Unfortunately 2 of the more traditional wines clearly lacked cellar hygiene and were spoiled by Brettanomyces.

Cavallotto’s wines clearly sit on the classic, traditional, Barolo side of the ledger.

As you’d expect from wines made in a more classical style, there’s longer maceration, time on skins, which often softens tannins, and, layers in complexity, think perfume and truffles. Oak is old and large Botte 2,000-10,000L in volume. Not only do these keep the wine fresher during maturation, but, impart no oak tannins, aroma or flavour. Maturation is longer, than, many in both Botte and then bottle, the very reason you’re just seeing the 2012 Barolo now when many have released 2013’s.

They make such beautiful, expressive wines!

Where in the World do Cavallotto’s wines come from?

Cavallotto is yet another example of knowing your producers, and, their vineyards. In the heart of Castiglione Falletto, Cavallotto holds the monopole (single owner) vineyard Bricco Boschis, only a stones through away from another famed Barolo monopole, Monprivato. Although I don’t like comparing the two, Monprivato, produces some of the most Burgundian, Nebbiolo I’ve ever had.

You can see the Barbera in the light green on the map is planted on the ‘Bricco Boschis’, it’s just going to be good. Just like Vietti’s Langhe Nebbiolo, Cavallotto’s is sourced from vineyards that are effectively declassified Barolo vineyard.

Surrounding the Bricco Boschis, within 500m are the remainder of their holdings. Including the Vigna Vignolo, consistently the source of their Riserva.

All the vines have serious age, with Dolcetto planting near 40 years old, Barbera 55 years, and, Nebbiolo 45 to 55 years old.

*Watch or listen as we explore the history, vineyards, winemaking and wines of Cavallotto!

Plush, plump, fresh, vibrant, luscious fruit, with juicy acid that sits beautifully in the wine. Will be delicious with food, so typical of the variety. Hallmark Cavallotto layering, with layers of tannin, and, flavour, considerably complexity, Lovely earthiness, red berry fruits, With great depth and length, wrapped, in layers of spice, and just a hint of earthiness. This shows just how good Barbera can be! Seamless, harmonious, beautiful.

Cavallotto's 2015 Barbera d'Alba Superiore Vigna del Cuculo is a beautiful wine with well-controlled acidity and plump blackberry flavors. The wine presents a full and generous flavor profile with dense primary fruit and balanced flavors of savory spice and flint. Winemaking sees fermentation with semi-submerged caps and punch-downs for up to two weeks. The wine ages in large Slavonian casks in the family's ancient cellars for two years. Barbera from around the region shows fantastic results in the warm 2015 vintage. This wine is a prime example.