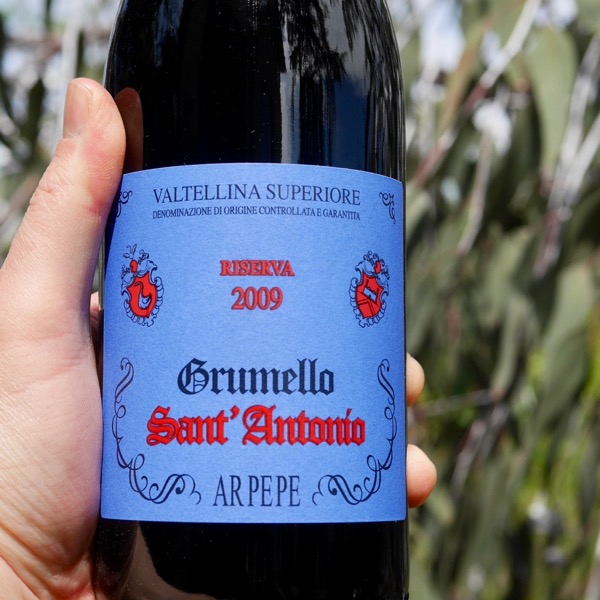 The church of Sant’Antonio a Montagna in Valtellina lies to the east of Rocca De Piro. For centuries, it has protected from on high the vineyards that stretch down along the Risc di Sassina, one of the most generous areas of the Grumello, 450 metres above sea level.

Valtellina Superiore Grumello Riserva Sant’Antonio DOCG is brought to life by its long maceration and malolactic fermentation with skin contact. Cuddled and cared for like a child by a generous, resolute mother, it matures in large barrels of chestnut wood.

Check out all of the wines by Ar.Pe.Pe

Like the church of Sant’Antonio, Giovanna, our mother, looks out at dawn every morning from her terrace to make sure the wine growers are taking proper care of these marvels. She decided to marry Arturo in that church on 4 September 1969 and, 40 years later, the amazing 2009 vintage meant we could celebrate the anniversary with the birth of a new wine brought up to appreciate the art of patience – a virtuoso who knows when the time has come to perform a solo.

Check out all of Ar.Pe.Pe’s Wines

For the first time, I had the pleasure of devouring a few wines from Ar.pe.pe earlier this year. These are vital, alive wines of grace and sophistication. Drinking them over 2-3 days revealed new, aromas and flavours with every sniff and mouthful.

Chiavennasca is a synonym for Nebbiolo. The name used in Valtellina for the variety.

Serve at 15°C in a Nebbiolo glass

In 1984, Arturo Pelizzatti Perego, bolstered by the experience gained in his father’s and grandfather’s firm, decided to create ARPEPE. His aim was to realize the full potential of the unique Valtellina terroir with all the pride and determination required for such an ambitious goal. To do so, Arturo started producing long-ageing Nebbiolo wines according to the rules of the oldest traditions.

The two video’s with Isabella and then of the 2017 Vintage will give you a sense of the extreme environment and dedication taken to make these wines. Beyond that just try them!

Today, Isabella (winemaker), Emanuele and Guido Pelizzatti Perego continue their father’s work as the fifth generation of winemakers and growers. In just a few years, thanks to careful technological innovations and the choice of a young and passionate team, Arturo’s dream has come true: his rare wines are once again a major point of reference on the national and international wine scene.

Given the extreme nature of the vineyards and the climate in Valtellina, all wines are not made every year. It appears that when the DOCG Riservas are made no DOCG Superiore is made. There are years when neither DOCG is made and only the DOC Rosso di Valtellina is produced.

The Vintage chart below shows just how long we have to wait between vintages of Superiore and Riserva! The jump from 2009 to 2013 for Riservas will be a tough one to last out!

Where in the World is Ar.Pe.Pe?

Piedmont is not the only Italian region to produce Nebbiolo! Valtellina Superiore is a thin horizontal strip in the very north of Italy above Milan.

Ar.Pe.Pe’s vineyards cover the Sassella, Grumello and Inferno sub-regions. Sondrio, Valtellina’s largest town is in the middle, Sassella the orange area to the left, Grumello the lime to the right and Inferno the burnt red just past Grumello.