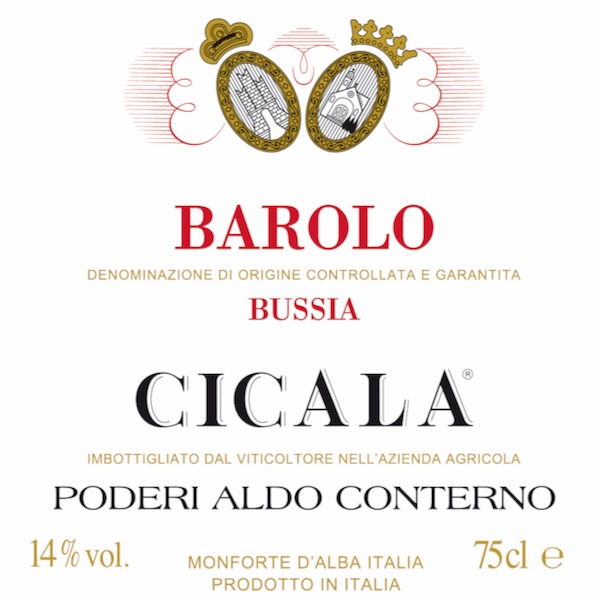 Hoovered a glass of this July 2019! Looking the goods!

No longer look like the blockbuster style Suckling called it on release. It’s mellowed, supple with plenty of energy, the hallmark of the northern part of Bussia. An exceptional core of delicious layered fruit, wrapped in fine tannins. This is in a beautiful zone with plenty of life left in it. The wines from Poderi Aldo Conterno have a longer life than many Baroli.

The estate’s 2005 Barolo Cicala is a transparent, mid-weight wine redolent of dark fruit, spices, minerals and licorice, all of which come together in the glass with superb elegance. Here the tannins are decidedly firmer and bigger than in the Colonello, even though the vineyards are just a few hundred meters apart! This powerful yet harmonious wine is simply radiant in its beauty. All that it needs is a little patience. Galloni

Poderi Aldo Conterno is one of the Great Estates of Barolo.

Back in 2005, during my first trip to Italy, I spotted a bottle of Aldo Conterno on the list of fine restaurant in Turin, just to the north of Barolo. As the cork was pulled an insane aroma released that was easily sensed across the table.

From that point I was hooked. Over the following years I’ve devoured bottles across decades. The elegance and finesse of these wines is spectacular. When you see comments of flavours lingering for minutes, they are no exaggeration!

Poderi Aldo Conterno is one of the great estates.

Poderi Aldo Conterno is steeped in the history of Barolo. Giacomo Conterno, producer of the famed Barolo Riserva, Monfortino, and, Barolo Cascina Francia, was run by Giacomo’s son’s, Giovani and Aldo, until 1969 when Aldo went his own way, founding Poderi Aldo Conterno.

Whilst having differing winemaking philosophies was at the root of the move. They share a commonality, in the desire to make wines that are a great expression of the vineyard, without the interference of small new oak. Aldo Conterno stated, “Vanilla, toast, spice and sweet tannins don’t belong in Barolo”.

The two brothers, Barolista to the core, have undoubtedly gone on to build to of the greatest estates in Barolo.

Aldo’s son, Giacomo, speaks to their continued drive to raise the bar. The estate has gone from 200,000 bottles in the 1980’s to around 80,000 today from the same, 25 hectares of vineyard. Combined with this skin contact has increased to 5-6 weeks. This for me ais a sign that the depth of fruit has increased, enabling or perhaps requiring the extended skin contact to tame it and further enhance the mouthfeel of the tannins. Romirasco perhaps the most ageable in Giacomo’s opinion.

Aldo Conterno’s holdings rest in Bussia, a vein that runs vertically up the centre of the Barolo commune Monforte d’Alba.

His three great vineyards, Cicala, Colonello and Romirasco (sometimes referred to as Rominasco) are clustered together in the very north of Monforte.

It is these three Cru’s that are bottle separately. The name Granbussia was created by Aldo for his Riserva, a blend of the best parcels of his three Cru’s. It’s typically a blend of 70% Romirasco, 15% Cicala and 15% Colenello.

Around 600 cases of Granbussia are produced, and, only in years deemed to be of outstanding quality.

VINEYARD: “Cicala” vineyard, in Bussia (Monforte d’Alba).
NOTES: the vineyard “Cicala” [meaning: balm-cricket] is about 40-45 years old and the vines are replanted from time to time. The main variety of Nebbiolo is Lampia and its rootstock is Rupestris du Lot.

Strawberry pie and cream aromas lead to a full-bodied palate. Very thick and powerful, with big, velvety tannins and masses of fruit. A blockbuster style.