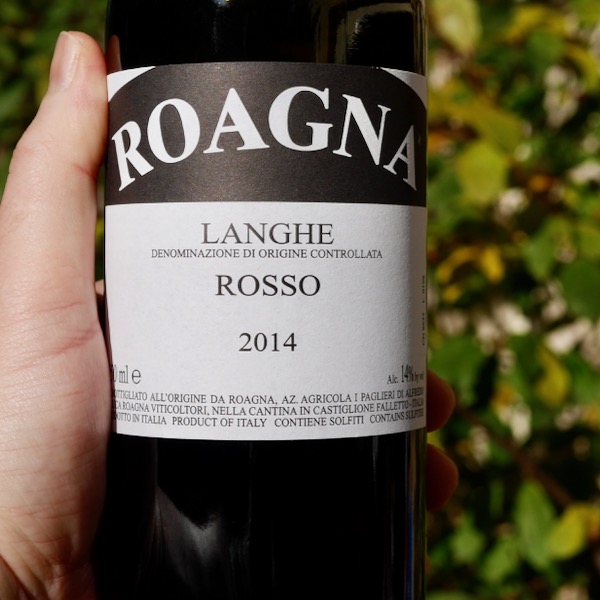 The 2014 Langhe Rosso is an absolutely gorgeous wine. Sweet tobacco, mint, crushed flowers, licorice, dried cherry and cedar give the 2014 striking complexity and nuance. In some vintages, the Langhe Rosso can be a bit frail, but the 2014 is supported by bright acids and beams of supporting tannin that confer a great deal of energy. The 2014 is a blend of estate fruit from both Pira and Pajè, that spent just under three years in oak and two years in cement. Antonio Galloni

We make Langhe Rosso from our young vines planted in the Pajè and Pira vineyards.
Pajè is one of the historic vineyards of the village of Barbaresco and it located in the center of the area planted to vines. Pajé is particularly rich in calcareous marl soil with a high content of active limestone. The amphitheater of Pajé opens onto the Tanaro river valley which mitigates the cold winters and hot summers. Pajé is a small strip of land facing South West.

Pira is a historic vineyard located in the village of Castiglione Falletto and originally owned by the noble family who had a private road that connected the vineyard and the castle hundreds of years ago. Our vineyard sits on the side of Serralunga d’Alba and Perno and is Southeast facing. Pira contains specific characteristics due to the slow disintegration of the rocks of Castiglione. Our family purchased this vineyard in 1989.

The vines for this wine have approximately 20 – 25 years of age. The roots are sourced by used the massage wood system by using only clippings that we have pruned from the Paje and Pira vineyards respectively.

Harvest takes place during the month of October when the fruit has reached perfect physiological maturity. The fruit is placed gently into small containers. Before being made into wine we manually select each berry in order to have perfect fruit.

Fermentation takes place exclusively in large wood casks thanks to a pied de cuve created from our indigenous yeasts. This lasts for ten days and then we use the ancient technique of maceration by splinting the submerged cap process which lasts for at least two months, (60 days). The wine is then aged in a neutral oak barrel for approximately five years.

Reading Roagna’s manifesto with my Vigneron’s cap on, it’s clear that they are driven to achieve excellence. In many ways, their approach reminds me of Yarra Yering. Pushing the boundaries with so many aspects of viticulture and winemaking, taking calculated risks, that, when successful, result in what are undoubtedly some of the best Nebbiolo wines of the world, and, occasionally some failures.

Not long ago we devoured a 2010 Pira, Roagna’s only Barolo amongst their stunning Barbaresco’s. The expression of the wine was breathtaking. It opened and blossomed beautifully over the course of the evening. The 2012’s from Barbaresco & Barolo, have already established themselves as great wines. It’ll be interesting to watch 2012 and 2013 Baroli fight it out as they age!

Roagna’s 2012 Barolos and Barbarescos are off the charts. The 2012s show such clarity, finesse and striking aromatics – it’s impossible not to be wowed by them – Antonio Galloni

If you’ve never tried Roagna’s wines make sure you, at minimum, grab a bottle of the Langhe. Although a blend across the Barolo and Barbaresco vineyards of Pira and Pajè respectively it will give you a great insight into the style and beauty of Roagna.

Roagna has long roots in the commune of Barbaresco, started in the twentieth century by Vincenzo Roagna. Vincenzo passed on the reigns to his son Giovanni Roagna, who in his turn saw his son Alfredo succeed him as the head of the estate. Today the property is run by the fifth generation of the family, Luca Roagna. Luca took on the winemaking for the property soon after his graduation from oenological school in 2001. The style of the estate’s wines has been consistently safeguarded down through all five generations of Roagna family members who have steered the property, with the wines made in a very traditional and classic style. These are deep, complex and structured wines that are built to age and handsomely reward cellaring.

The heart of the Roagna estate is its six and a half hectares of vineyards in the commune of Barbaresco, most of these lying in the fine cru of Pajè. From the Pajè vineyard the Roagna family now makes three distinct cuvées, a Barbaresco “normale” labeled as Barbaresco “Pajè,” a Barbaresco Paje Vecchie Vite (old vines) and “Crichët Pajè” – made from the crest of the Paje cru. In 1989 the family’s long-held aspirations of owning top level crus in Barolo comparable to their Pajè holdings in Barbaresco came true, when they purchased a parcel historically known as La Rocche e La Pira, in the fabled village of Castiglione Falletto. Through the 2004 vintage wines from that Vineyard were labelled as either Barolo “La Rocca e La Pira” or Barolo Riserva “La Rocca e La Pira.” For the 2005, 2007 and 2008 vintages, wines form that vineyard were labelled as “La Pira” or “La Pira Vecchie Vite” though the fruit was sourced from the same vineyard. It was changed again beginning with the release of the 2009 wines – they now have to be labelled with simply “Pira” which is the new official name of the vineyard according to the new disciplinary for the Barolo appellation. There will also sometimes be a Barolo Pira Vecchie Vite selection from the oldest vines in the cru and he will still occasionally release a Riserva selection which would be a barrel or barrels of the VV which were held back for additional time in the cellar.

Luca Roagna continues to step up his game. This is a superb set of new releases. The 2011 Barbarescos are gorgeous. They will also drink well with minimal cellaring, which, as Vinous readers know, is quite unusual for these wines. At the same time, the 2011s retain a very classic sense of mid-weight structure and good overall freshness, which gives them exceptional balance. One of the more recent developments at Roagna has been a move towards shortening the amount of time the wines spend in cask (something I am seeing at quite a few traditionally minded estates) with the goal of retaining a bit more freshness in the wines and allowing the aging to take place in bottle rather than in oak. In my view, that is a huge positive. One of the unfortunate results of the investments Roagna has made in recent years has been an increase in pricing. For that reason, I am often attracted to the Barbaresco Pajé and its sibling, the Barolo Pira. Still, it’s hard not to be impressed with the overall level of quality here. Antonio Galloni, Vinous

After the order form you’ll find the full Manifesto. It makes for facinating reading.

I don’t necessarily agree that there is no change at Roagna, introducing Chardonnay and cultivating seedling from ‘Selection Massale’ (choosing the best vines in the vineyard) being two examples of change.

These notes from the importer paint an accurate picture of Roagna

I would classify Roagna as an ultra traditional producer. In fact, the wineries motto is ‘Roagna does not change’. This is a pretty powerful message to the wineries that go points chasing. To Luca Roagna, he does not care if his wines score 96 points or 69 points. It will not change the way he makes wine. It is true that Roagna is not for everyone. No problems with that. However, if you do dig the wines, each different cru will blow you away.

The vinification techniques employed in the Roagna cellars have not changed a bit with Luca Roagna taking the helm. The fermentation still includes a full sixty day maceration before aging in large, Slavonian oak botti for anywhere from three to five years (depending on the quality of the vintage) prior to bottling. The wines are bottled unfined and unfiltered, and often the estate will also hold back the wines for several years of further bottle aging prior to release. In addition to their fine Barbaresco and Barolo bottlings, the property also makes a Nebbiolo Langhe Rosso cuvée from younger vines in their Barbaresco and Barolo holdings, a chewy and intensely flavored Dolcetto, and a white wine that is a blend of 95% chardonnay and 5% nebbiolo (vinified without the skins) which they label as Langhe Bianco Solea. The Langhe Bianco Solea is held for three years prior to release by the winery, and is a medium-full, fresh and pure white that typically offers up an aromatic blend of pear, flowers, a touch of honey and pastry cream.

But as noted above, the heart and soul of the Roagna domaine are its Barbarescos and Barolos. The Barbarescos are deep, pure and soil-driven wines that offer up fine depth of black fruit, strong signatures of terroir, notes of licorice and fresh herbs and a judicious base of tariness. On the palate both Barbaresco bottlings are full-bodied and structured, with firm, well-integrated tannins that demand some time in the cellar before drinking. They have a superb track record for longevity. The Barolos are a bit more robust and show some red fruity character to go along with their core of black cherry fruit, anise, autumnal soil tones, tar and woodsmoke. On the palate they too are full-bodied and powerful wines, with fine balances and the potential to easily evolve in the cellar for thirty or more years. Like many traditional Barolo or Barbaresco producers, the wines of Roagna improve immeasurably if decanted for a significant period of time prior to drinking, even when the wines have spent a number of years in the cellar. The estate has a long and successful history, but also seems likely to jump up a notch in quality under the perfectionist regime of Luca Roagna. One day soon the fame of the winery will catch up with the outstanding quality of their wines.

Where in the World do Roagna’s wines come from?

Roagna’s vineyards are spread across, Barbaresco with sites in Carso, Montefico, Pajè, and, Asili. In addition they hold land in Barolo’s Castiglione within the Pira vineyard.

The 2014 Langhe Rosso is an absolutely gorgeous wine. Sweet tobacco, mint, crushed flowers, licorice, dried cherry and cedar give the 2014 striking complexity and nuance. In some vintages, the Langhe Rosso can be a bit frail, but the 2014 is supported by bright acids and beams of supporting tannin that confer a great deal of energy. The 2014 is a blend of estate fruit from both Pira and Pajè, that spent just under three years in oak and two years in cement.