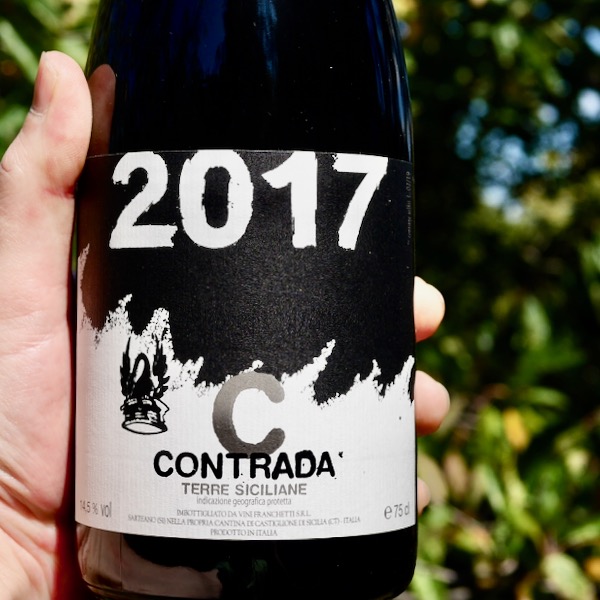 The lowest of Passopisciaro's contrada. Chiappemacine is typically fuller and richer by comparison

Made from Nerello Mascelese, some call it the Barolo of the South, others a cross between Pinot & Nebbiolo. I prefer to say it is itself & delicious. The vineyards of Etna have undergone a major renaissance in the last couple of decades. Passipisciaro has been one of the wineries at the forefront. I was blown away the first time I tasted this wine.

The Chippemacine and Sciaranuovo tend to play at roughly the same weight. This year is no different.

Check out all the 🌋Lava Juice!🍇

Contrada Chiappemacine (Contrada C) is a small domain at 550 m (1,000 ft) above sea level, our lowest site for a single vineyard cru. The site produces a more full-bodied, rounder style because it lies on the last outreach of Mount Etna’s lava; beneath the thinner strata of lava lies a limestone bed to which the vines penetrate. We own 1.2 hectares of vines in this contrada.

Read all about our extensive tastings of Passopisciaro wines in our Wine Bites Mag article “Passopisciaro the Jurasic Park of Wine! Ancient Vines Revived to Create the Liquid Essence of Etna!”

Passopisciaro is at once both a fossil and a piece of modern art! Vines aged from 70-120 years old grow on the slopes of a volcano at altitudes that make noses bleed. Less than 20 years ago these wines were unknown, the Grandfathers of today’s revolutionists made simple wine from overcropped vineyards.

Today the next generations are pushing the boundaries making wines from 100% Nerello Mascalese. Often referred to as a hybrid of the great Nebbiolo’s from Barolo and Pinot Noir’s from Burgundy, Nerello Mascalese is capable of making wines with real personality! They’ve taken something incredibly ancient, gone back to the DNA and started again. In under a decade the evolution of these wines have accelerated through a millennia.

Vines have been nurtured back to balance, tended by hand on terraced vineyards that one in every  3 years find themselves under ash clouds hurled into the sky from the very mountain they are planted on, a volcano, Mt Etna!

The heatwaves that hit the mainland of Italy also came to Etna. With no drops in temperature that usually brighten the nights, the long, hot summer lasted until mid-September. We had to add a little water to the vines to help them through. The grapes had ripened steadily and gradually during late summer and, especially, fall. The advanced maturation in the grapes caused the harvest to begin more than a week earlier than usual and all at once, from October 20th to 29th.

The Nerello Mascalese wines of 2017 are strong in body, powerful in structure, with notes of ripe red fruits, blood orange, pomegranate, and camphor.

With fruit from the Contrada Chiappemacine, the 2017 Contrada C shows an unexpected floral note of blue flower, wild rose or orange blossom that lifts gently from the bouquet. The wine offers a solid and compact quality of fruit with good tension and energy locked within. This is an elegant and graceful wine with a fine but loosely knit texture. It ages in large oak casks for 18 months.