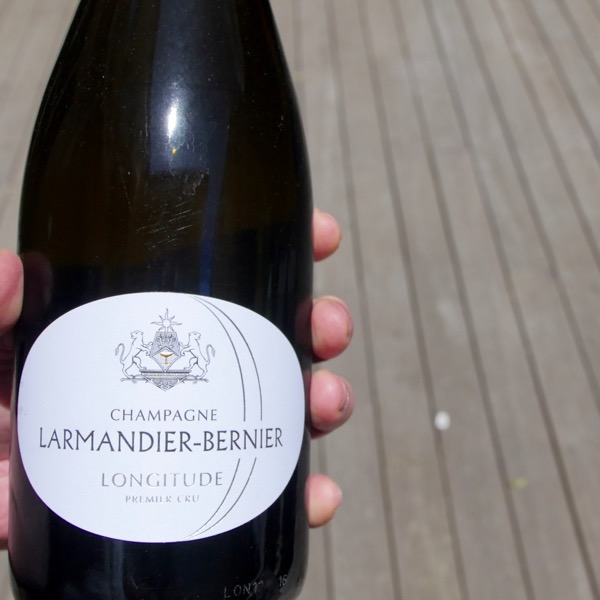 Deceptively sophisticated, the depth of fruit is beautifully counterpointed with stunning mineral acid & layers of flavour!

Larmandier-Bernier was one of the first grower Champagnes to make a mark in Australia. Everyone had been used to hyped up, over marketed crap from big houses. These guys sent a ripple through the market that became a shock wave of yumminess! 100% Chardonnay Longitude is the more elegant of the two in comparison with Latitude.

Available in Magnum too!

Check out all of the wines by Larmandier-Bernier

2015 base with 35-40% reserve wines going back to 2004, disgorged in March 2019. The name here refers to the ‘vertical’ nature of the geographic locations of the vineyards as well as the style of wine that results from the very chalky soils of these sites i.e., a more linear, mineral style of wine. To be specific, the vineyards are located in Cramant, Avize, Oger, and Vertus (north of the village). While Latitude is expansive across the palate, Longitude is all about minerality, line and raciness. This is again 100% Côte des Blancs Chardonnay, yet the vineyards from which it is drawn have topsoils that are much thinner and the vine’s roots plunge straight into the chalky bedrock.

The grapes are pressed gently, the juices are clarified very slightly and then go directly into wood. The natural alcoholic fermentation (indigenous yeasts) and the malolactic fermentation begin spontaneously in the Stockinger casks and vats. The wines are matured on the natural lees during their first year, with no filtering or fining being carried out.

The blending and the tirage are carried out in July. The bottles are taken down into the coolness of the cellars and stacked on lattes, the second fermentation takes place and maturation goes on for at least two more years.

Each bottle is disgorged by hand 6 months before being marketed. The dosage is only 3g/l (extra brut!).

35-40% reserve wines going back to 2004, disgorged after around 4 years in bottle. The name here refers to the ‘vertical’ nature of the geographic locations of the vineyards as well as the style of wine that results from the very chalky soils of these sites i.e., a more linear, mineral style of wine. To be specific, the vineyards are located in Cramant, Avize, Oger, and Vertus (north of the village). Connecting the dots between these communes forms a line close to the fourth meridian. So, Longitude. While Latitude is expansive across the palate, Longitude is all about minerality, line and raciness.

This is again 100% Côte des Blancs Chardonnay, yet the vineyards from which it is drawn have top soils that are much thinner and the vine’s roots plunge straight into the chalky bedrock. Made in the same fashion as the Latitude cuvée, expect a vibrant, crystalline and remarkably refined Champagne, crackling with chalky energy and salinity and with wonderfully bright citrus, nectarine and white pepper notes.

I don’t know who coined the term “Grower Champagne”, when you see it, make sure you take a second look before you move on. Champagne producers are split into three groups:

Larmandier-Bernier sits comfortably in the Grower group. Doing all the little 1 percenters in the vineyard and winery that make the difference between a drink and a pleasure fest!

Visit the vineyards and you’ll see horse-drawn ploughs and during the pruning and harvesting seasons the same faces year after year. That kind of continuity just makes for deep knowledge and empathy for the vineyards that = great wine.

In the winery, the effort goes in with the use of old oak barrels and foudré, large format barrels reaching into the 1000’s of litres each. Lees stirring, re-suspending yeast from fermentation that has settled to the bottom of the barrel to add extra creaminess and complexity. Use of carefully crafted reserve wines in the blends. Reserve wines are older wines that are a blend of several different years, often stored in foudré. Their use imparts complexity and a generosity that you wouldn’t see in the wine until it had been aged for much longer in bottle were it not for their use.

All of these things only have a positive impact when the fruit is of quality, has the depth to handle oxygen contact and be improved by it rather than fall apart.

Combined the effort in the vineyard and winery result in layered, complex, yummy wine, with bags of personality.

“The Larmandier-Bernier Champagnes are some of the purest and most utterly engaging wines being made in the region today. I can’t recommend them highly enough.” Antonio Galloni

“Few growers’ ranges in Champagne are as consistently outstanding as that of Larmandier-Bernier” Andrew Jefford, The New France

“In a region where vineyard work is not always given the priority it deserves, Larmandier-Bernier is a model of what can be achieved through conscientious and diligent care in the vines.” Peter Liem

Like Egly-Ouriet and Selosse, Larmandier-Bernier has been rated as one of Champagne’s top 5 producers by Andrew Jefford in his celebrated work, The New France, [Mitchell Beazley]. This estate is meticulously run by Pierre Larmandier and his wife Sophie. Pierre’s family have owned vineyards in the Côte des Blancs since the Revolution. The estate is now 15 hectares, predominantly in Vertus, at the Southern tip of the Côte des Blancs, yet there are also holdings in Cramant, Chouilly, Oger & Avize. The vineyards are biodynamically worked (almost unheard of in Champagne) and the average age of the vines is 35 years (most Champagne vineyards are considered ‘old’ and due for replanting at 25 years). Yields are kept very low by Champagne standards, 50 hl/ha on average.

In the winery the approach is classic “minimalist” with indigenous yeasts, long, slow ferments of up to two months and very little sulphur. A mixture of fermenting vessels are utilised including large oak vats and even barriques. Very low dosage levels too and the dosage is designed to be as neutral as possible. Sometimes, as is the case in the “Terre de Vertus” there is no dosage at all. In other words, everything is designed to maximise the expression of the vineyard, commune and vintage. The resulting wines are wonderful expressions of their origins, fine and delicate, yet with and a mineral intensity that keeps you coming back, sip after sip. Peter Liem (champagneguide.net) has written: “Larmandier-Bernier is one of the finest estates in the Côte des Blancs, producing wines of unusual detail and clarity of expression. The style is for champagnes that are dry, minerally and terroir-driven, emphasizing purity and finesse over richness or sheer power.”Such purity and minerality could only come from the man that Laurent d’Harcourt, MD of Pol Roger, recently dubbed “The Ayatollah of quality” and his impeccably tended vineyards.

Where in Champagne are Larmandier-Bernier’s Vineyards

Based in Vertus Larmandier-Bernier’s vineyards are dotted throughout the Côtes des Blancs with thin top soils over chalky bedrock. The Longitude comes from a string of vineyards that run in a line north to south in the villages of Vertus, Cramant, Oger & Avize.

The NV Extra Brut Blanc de Blancs 1er Cru Longitude is powerful, resonant and beautifully textured in the glass. This is the Larmandier-Bernier style at its best. Almond, dried flower, lemon confit, chamomile and mint are all laced together in a super-expressive, resonant Champagne that is firing on all cylinders today. Ample and enveloping, the Longitude is a wine of pure and total class. Longitude is 100% Chardonnay taken from chalk and limestone-rich sites in Vertus, Cramant and Oger that sit at the same longitude. Of these, only Vertus is a 1er Cru village, as Cramant and Oger are both Grand Crus. The current release is 60% 2013 and 40% reserve wines. Dosage is 4 grams per liter.