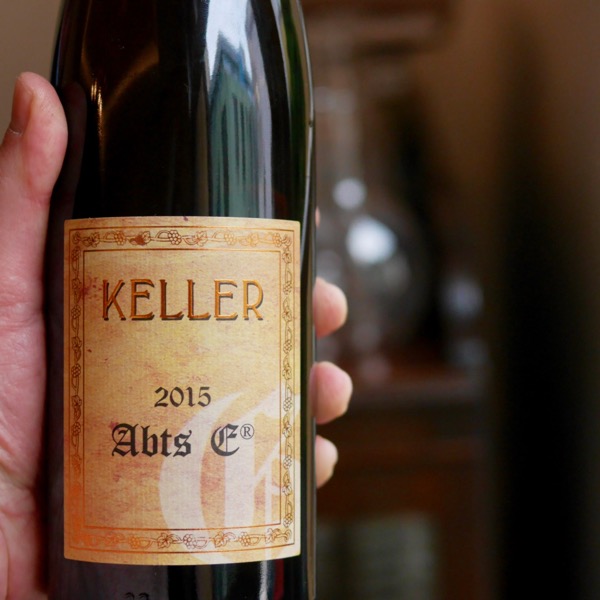 Wine of the Bishop Worms!

Absolutely stunning, the depth and length of this wine are insane. Beautifully developed, the texture of this wine is something special. Such an intrigue perfume, maximum harmony and poise.

Such an intrigue perfume, maximum harmony and poise. Today a sub-plot of the Brunnenhäuschen Grand Cru. The Kellers acquired their parcel in 1996 and own the oldest vines. Like Morstein, Abtserde ripens late, often in November. Very stony ground with little topsoil tends to produce sparse clusters of small berries. Beautiful minerality and finesse, dances over the palate.

The vines that Klaus-Peter has in the AbtsE are impressive, as they produce very tiny berries because of chlorosis (a vine disease that causes early yellowing of the leaves) which further slows photosynthesis during the hot summer, and translates into a very racy, minerally and discreetly complex wine. The first Keller vintage of the AbtsE, the 2006, is an outstanding wine by any measure, but I have little doubt that it will be surpassed in quality by subsequent vintages from this great vineyard.

Justifying $1,200 for the epic Keller G-Max Riesling is a tough call for most. Luckily the Keller’s produce a superb range of dry and off-dry Rieslings from their Rheinhessen vineyards at more affordable prices!

Getting a last minute phone call to attend a tasting of Germany Rieslings, saw me running through the rain, arriving late to a room full of wine lovers engrossed in a set of glasses filled with what turned out to be Rhienhessen’s nectar from the gods!

Amongst the wines were a flight of wines from Keller. A name I’d heard a lot about, but, never, tried. Four dry and one Kabinett (fresh off-dry style). As I tasted through the bar just kept getting raised wine after wine. Then it happened, the G-Max!

The G-Max is one of those wines that makes your heart race. I don’t believe in wine scores for the consumer, they lack context, ability to meaningfully relay quality to the consumer, and, fail to effectively differentiate that quality. I’d simply rate this wine as perfect. The room literally went quiet as I drank it. That’s happened on but a few occasions before. I think somehow my sense of smell, taste, and touch were so overwhelmed that sound wasn’t being processed! Sounds like crap, but, it’s the best explanation I have.

The room literally went quiet as I drank it. That’s happened on but a few occasions before. I think somehow my sense of smell, taste, and touch were so overwhelmed that sound wasn’t being processed! Sounds like crap, but, it’s the best explanation I have.

It’s with great pleasure that we offer a range of Keller’s wines to you today.

Having trouble getting your head around German Riesling check out this post by Wine Folly “Understanding German Riesling” They’ve done a solid job in explaining the German style and quality system. There are a couple of vagaries when they talk about VDP (“Verband deutscher Prädikatsweingüter”). Don’t worry too much about those just recognise that as you move up the ladder things get tastier!

Weingut Keller and its inspired head, Klaus-Peter Keller, are amongst the very finest estates in all of Germany.

It’s interesting that Klaus-Peter trained with Hubert and Romain Ligner, and, Eric Rousseau in Burgundy. The parallels between the domains are worth considering. Meticulous care of the vineyards, low yields, wines of great harmony and texture. It’s the last, texture that has always fascinated me as a winemaker. It’s the one that often separates the great wines of Europe from their Australian counter parts, and, the one I was heavily focused on refining at Yarra Yering.

Keller has been in the family since 1789. Thier 18ha holding consists of 15ha of Grand Cru sites. The Limestone and Von der Fels Rieslings are blessed to incorporate GG fruit!

“For me the best riesling is not supposed to be a monster riesling. The word high quality in combination with riesling is for me precision, finesse and minerality. When the glass is finished I must be eager to drink the next one- only then do I know that the wine is good.” Klaus-Peter Keller

Since taking the reigns in 2001 Klaus-Peter has gradually increased the proportion of dry Riesling produced by the estate, and, it is these wines that have brought critical acclaim.

I’ve not had the fortune to meet Keller. When you read from those who have it’s clear that Klaus-Peter has the kind of detailed approach that is common to many of the great estates of the world. John Gilman gave a fascinating insight into Weingut Klaus-Better Keller for the 2006 release in his critical and historical commentary “Weingut Klaus-Peter Keller- Germany’s Answer to Clos Ste. Hune.” It shares the deep thinking and detailed approach Keller takes in both vineyard and winery. It’s safe to say that since it’s writing Keller’s wines have continued to go from strength to strength. The following passages are from Gilman’s commentary.

Weingut Keller is actually one of the latest riesling harvesters in all of the Rheinhessen, with the Grosses Gewächs sections of their vineyards often brought in the first few weeks of November! And yet these are not high alcohol and burly wines, as the potential alcohol of the dry wines is normally no more than 12.8 to 13.2 percent (which is significantly below what most top growers in the Wachau are attaining these days for their rieslings). To achieve this the Kellers take active steps to slow the vegetative cycle of the vine during the course of the growing season. First of all, they choose low-yielding clones for their new plantations, typically which have small bunches of small berries, and which usually come from cuttings of their best old vines or those of their winemaking friends. With the older vines, and the Kellers do have plenty of these, there is less need, as nature serves as an active limit on yields. However, Klaus-Peter and the rest of the Keller vineyard team take active measures to slow down the ripening process during the course of the summer, which includes pulling a couple of leafs per grape shoot on each vine at regular intervals starting in early June to slow down the plant’s photosynthesis, pruning the vines to keep the grapes nicely shaded through much of the growing season (to keep the grapes from getting sunburned during their prolonged hangtime) and keeping good spacing between bunches to aid air flow and retard botrytis (and other forms of rot) forming in the Riesling bunches targeted for making dry wines. This is a viticultural methodology that should be studied and emulated in many more wine regions in the world that today are struggling in vain to produce world class wines with excessive ripeness and dizzying sugar levels.

In the cellars, Klaus-Peter has made a few changes as well from his father’s time, but the vast majority of the focus continues to be on the vineyard work. The white wines now (particularly the Rieslings) are fermented more in old oak fudre, rather than in stainless steel tanks than was the case for his father, and indigenous yeasts are relied upon whenever possible for the fermentations. The one relatively novel approach that Klaus-Peter has adopted for many of his white wines is to allow the grapes to macerate on their skins for thirty or forty hours prior to pressing them and running off the juice to fuder for fermentation. This is a bit of a risky maneuver that requires perfectly pristine fruit, and so selection in the vineyard and at the winery before the grapes go to the press is a fundamental tenet of the Keller philosophy. The basic bottlings of the white wines are fermented at slightly lower temperatures than the Grosses Gewächs, and they are bottled earlier as well. The riesling Grosses Gewächs and the G-Max bottling (Klaus-Peter’s top, old vine dry riesling cuvée) are allowed to rest on their fine lees until March after the harvest, prior to being prepared for bottling, which is done with a very light filtration. Additionally, some of the cuvées are also held back in bottle an additional six months prior to being released to allow the wines to fully harmonize.

Finding the balance of physiological (flavour and tannin) and sugar ripeness in the vineyard, without compromising freshness, has been the key to achieving greatness across the wine world.

Where in the World are Keller’s Wines Made?

Keller’s home is in Flörsheim-Dalsheims lies on the rolling hills on the Rheinhessen-Rheinpfalz border, in the area of the Rheinhessen known as the Hügelland, centered around the towns of Flörsheim-Dalsheim and Westhofen. Here the soils are dramatically different from those that lie along the river, with many of the best lying on outcroppings of chalky marl, which recall the Trimbach family’s great Clos Ste. Hune more than they do the slate of the Mosel.

In this, southern part of the Rheinhessen, all of Keller’s GG vineyards rest within 10km of their home. This area of Germany is home to their great wine regions.

Vintage Notes from the Kellers

A crisp bouquet of lemon zest, tangerine, grapefruit and wet stones is the prelude to a silky, weightless and incredibly intense wine of breathtaking complexity and completeness, which positively screams of its limestone origins. Drink 2020-2065
William Kelley, Decanter