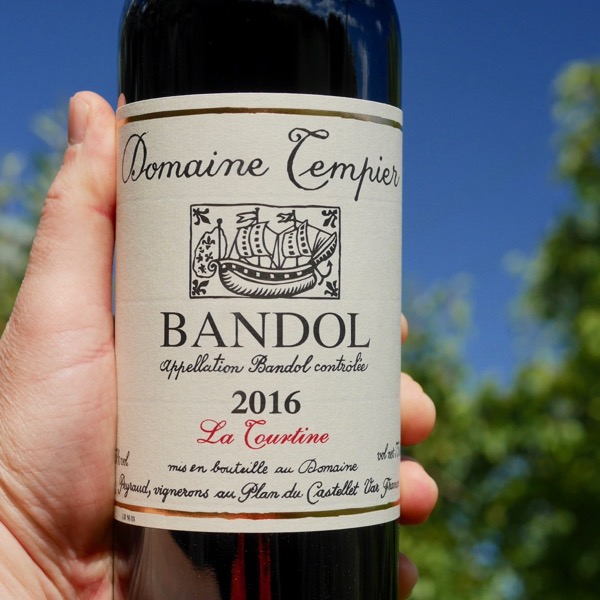 The La Tourtine parcel lies at a slightly lower elevation, in the Castellet region, and is more homogeneously clay soils. This parcel yields a powerful, rich, concentrated and surprisingly polished Bandol that has the fruit and texture to impress in its youth, yet the concentration to age beautifully.

The Mourvedre vines flourish on this terroir producing excellent wines that are powerful, tannic and fruity. La Tourtine comprises 70–80% Mourvedre depending on the year. Frequently windswept by the mistral, this vineyard is particularly well exposed, resulting in a wine with long ageing potential that retains its red berry and spice aromas even after 10 to 15 years.

About Domaine Tempier by Kermit Lynch

When Lucie “Lulu” Tempier married Lucien Peyraud in 1936, her father gave them Domaine Tempier, an active farm that had been in the family since 1834, near Le Plan du Castellet, just outside the Mediterranean seaport village of Bandol. Tasting a pre-phylloxera bottle of Domaine Tempier Bandol (a wedding gift from his father-in-law) inspired Lucien to research the terroir of Bandol extensively.  Up until that point, old vineyards planted with Mourvèdre had been systematically replanted to higher-yielding varietals. However, more research not only showed its historical roots to the area, but the grape proved to be more resistant to oxidation, producing wines with great aging potential. By 1941, with the assistance of neighboring vignerons, Lucien worked with the I.N.A.O. (Institut National des Appellations d’Origines) to establish Bandol as its own A.O.C. Needless to say, large-scale replanting of Mourvèdre ensued, and Bandol now requires a fifty percent minimum in all reds. Lucien will forever be celebrated as the Godfather of Bandol, but also as the man who revived Mourvèdre to its former glory. Raising deep and structured wines of such refinement and longevity has made Domaine Tempier truly a grand cru de Provence.

Grapes & Making from the Domaine

This wine is made from grapes grown on a terroir near the village of Le Castellet. The vineyard sits high up on the hillside, on average 170m above sea level, and has relatively homogenous soil comprised of chalk and clay on top of 100 million year old rock. The Mourvedre vines flourish on this terroir producing excellent wines that are powerful, tannic and fruity. La Tourtine comprises 70–80% Mourvedre depending on the year. Frequently windswept by the mistral, this vineyard is particularly well exposed, resulting in a wine with long ageing potential that retains its red berry and spice aromas even after 10 to 15 years.

The La Tourtine vineyard lies at the top of the hillside in Le Castellet where the vines grow on the archetypal terroir of AOC Bandol wines: 250 million year old calcareous clay. In the height of the summer the soft clay becomes so dry that it retracts, creating cracks in the earth wide enough to put your hand in. This may sound surprising, but it proves that the vines have quite deep roots, a particular characteristic of La Tourtine. The combination of frequent wind and plentiful sunshine to which our hilltop vineyard is exposed is probably what makes this terroir one of the finest in the Bandol area.

All grapes are harvested by hand. After de-stemming, grapes are fermented with natural yeast and vinified for 2 to 3 weeks in stainless steel.  After maceration is finished and must is pressed, the wine is moved to oak foudres for malolactic fermentation. Aged in oak foudres (25 to 50 hl) for 18 to 20 months. Bottled unfined and unfiltered.

The Vineyards of Domaine Tempier

The three single-vineyards of Domaine Tempier are: La Migoua, La Tourtine, and Cabassaou. All are made up of clay and limestone, but there are variations in each. La Migoua is made up of heterogeneous clay that varies in colour between red, ochre, and blue. At 270 meters, it sits at the highest altitude of all the vineyards. The parcel’s complex sedimentation is largely due to the subduction of a tectonic plate which has surfaced the oldest rock outcroppings in the whole of the appellation. Surrounded by garrigue and pine forest, the grapes translate to earthy, gamey wines. La Migoua has the smallest amount of Mourvèdre in the blend, with the highest percentage of Grenache of the three cuvées. La Tourtine sits just above Cabassaou. The soil here is more homogeneous, with rich clay. La Tourtine produces powerful, tannic wines with gorgeous fruit character. Since Cabassaou sits lower on this hillside, it is protected from the strength of the Mistral, enjoying temperate breezes and maximum sunshine. There is ripeness, density and power in these wines.

“Every year we try to look for similarities and compare the new vintage with the previous ones. And every year we have to admit that the each one is unique and 2016 is no exception to the rule.

After the end of 2015 harvest it rained several times, but not a lot and that was followed by a mild, dry winter.

Spring was also dry; it rained several times but not very much, not enough to fill the water table. The weather was unusually cool, the atmospheric conditions were very good.

Summer came along; it was very dry and got hotter and hotter with a lot of wind until the harvest.

We had thought of not starting very early due to the cool conditions at the beginning of the season and late ripening, but then the hot and dry weather at the end of August made us start harvesting on August 26 for the rosé wine. There was some rain on Septembre 14, but it didn’t improve ripening or the plant’s health. The grapes were very healthy; we sought the best compromise between maturity and balance.

We must congratulate our teams who are required to adapt to more and more surprising harvesting conditions. Thanks to them we managed to harvest the two sites with maximum efficiency.

Indeed, it was the very first time we made wine from La Laidière whose vines we had been tending for a year. Despite the different orientation and soil, we noticed very little difference in maturity between the two sites : we started and finished at the same time, with the similar ripening gap between the vine varieties.

We expected a dramatic loss of volume due to lack of rain. In fact it is only 15% and we are amazed that the vines were able to withstand the drought. It seems our preliminary work on preparing the soil was worthwhile, along with a bountiful growth this year.

The fermenting stage is long: due to the drought there was little yeast on the grape skins.

The first tasting are promising. The wines are balanced thanks to the remarkable freshness for the sort of year we went trough. We’ll have to wait longer before making an announcement about the 2016 potentiel, which again is different from the former ones.”

Right on the coast between Marseille and Toulon.