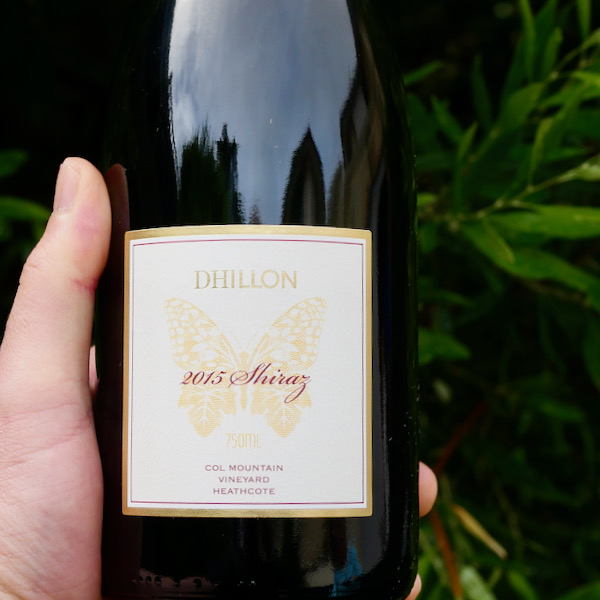 This wine, to state the obvious, has been quite a while coming! In 2014 we began making experimental ferments using four clones from this exciting vineyard and decided to mature the blended bottled wines until we felt they were settled and singing. The wine is based on the smooth and aromatic Shiraz clones PT23 and 1654 with a little of the robust and rich Yalumba and R6WV28. The Col Mountain wines are earthier and more structured than our traditional more northern source of Shiraz, Colbinabbin Estate, which has previously made up all, and now roughly 60%, of the Pyrette label. The 2015 is in a beautifully balanced and harmonious place after five years bottle maturation. The nose is deeply layered with earth, spice, red current, dark cherry and plum aromas. Seriously deep and cause for reflection. The palate is mouth filling and harmonious with fine fruit carrying tannin giving excellent length. We have had fun lining up all the wines made so far from 2014 to 2021 (from barrel) and there is a strong vineyard signature within the context of the different vintages; earth, fruit depth, structure, length.

Check out all of the wines by Bindi

It’s great to have someone with as much experience as Michael so clearly articulate what has been a massive period of evolution the Australian wine industry. Particularly on the Pinot front. This is a must watch for any Pinot fanatic!

Michael Dhillon’s been around the block. Mostly Block 5 & a few others that Bindi planted moons ago. After over a generation of growing grapes and making wines, Bindi, has the reputation of one of Australia’s great Pinot and Chardonnay producers. They aren’t resting on their laurels!

New high density planting are in the ground and will soon bare fruit. The ever present desire to achieve the most delicious wine possible still beats stong in his heart.

Michael was born in the town of Gisborne (where his family on his mother Kaye’s side have been since 1853) , 55kms north west of Melbourne, and grew up at Bindi, a 170 hectare farm just outside the township. Today he and his family produce chardonnay and pinot from their vineyard at Bindi which Bill and Michael Dhillon established in 1988.

Michael served as assistant winemaker to Stuart Anderson from 1991 until 1998 when he assumed full responsibility. Michael learned his craft working with Stuart as well as experiencing vintages in Europe, where he spent time with the Champagne house of Jean Vesselle in Bouzy, with Alain Graillot in Croze-Hermitage and four vintages in Tuscany at Tenuta di Valgiano. During the mid 1990s Michael also worked with John Wade over parts of three vintages when John was establishing Howard Park Winery. Michael’s passion for Burgundy has seen him visit over 100 different domaines over two decades.

This new DHILLON label is a lovely evolution and home for wines that are other than Bindi. Pyrette remains a stand alone single label for delicious, medium weight, fruity and earthy Shiraz. Just the one wine. The new label allows us to enjoy making and offering small parcels of wines as time and inspiration allows. Initially three wines have been made from the fabulous Col Mountain vineyard on the Mount Camel Range in Heathcote; a fragrant, dry and fresh 2021 Grenache Rosé, a berry and spicy 2020 Grenache red and a complex and layered 2015 Shiraz. Fun and games.

The label is a thoughtful derivation of relevance. The DHILLON fonts and the butterfly (Bindi means butterfly in some First Nations language) evolve and transform, symbolising the shifting of eras and activities. The butterfly is endemic to India, Australia and south east Asia. It is found in Delhi, India’s capital, a name that evolved from Dhilli, derived from Dhillon. Ken Cato, friend and identifier of storytelling images, has created this subtle and beautiful label.

As always, the wines are deeply personal and transcend fermented grapes and bottled beverage. The first wines come from Bernadette and Colin Neate’s much loved vineyard that sits on a high and rocky outcrop. It’s a very dramatic and individual site with pockets of vines established across the slope. In the late 1980s we got to know Colin and Bernie as they managed Chardonnay and Pinot Noir in the Macedon Ranges. In 1998 they moved to Heathcote to establish the Colbinabbin Estate vineyard for John and Jenny Davies and a decade later established their own vineyard. Transformation over the decades and here we all are today, friends and colleagues enjoying new projects together, with eyes to the future. Plenty of names, a smattering of tasty wines and lots of good stories.

The Col Mountain Vineyard is a very special site that stamps its fruit and wines with great personality. We have been making shiraz from these blocks for seven vintages and it’s about time we released some! The wines require several years ageing to soften and we have been able to do that patiently in our cellar and now it’s time to offer them up.

The ride was long and radical. When we thought ‘this season has had it all’ it gave some more, and what more it gave! Well, more extreme challenges for much less wine.

The early winter rains were a blessing and the soil saturated and the dams overflowed, as did our level of satisfaction. Then things dried out. Spring was dramatically dry and cold and then turned nastily windy, hot and dry. The countryside suffered. With the dry and cold of early spring came frightening freezes and hard frosts that damaged the new shoots. Here we go we said. The fruit set was disrupted by winds and wildly swinging weather and the crop was further reduced. The summer was so severe, the countryside so vulnerable, the mood was glum and our concerns went well beyond our own crops. Our colleagues and country folk and the fauna and flora of many states were scorched and tormented by smoke and fire in unimaginable ways.

Then things turned, and then they turned again.

From the middle of summer, the middle of January, the rains came. The mild weather made for smiles for the season, brows softened and stock was taken. The vines took this relief and freshened as the countryside flourished a remarkable green brightness. The mushrooms sprang and the fragile crop and rebounding vines suddenly became a concern; humidity, spores and mould, delays in ripening, where was it all headed? The maturity of the fruit was slow and long, ambling past March into the fast fracturing of health and economy as we moved from the burning summer, then the rains, to the shutdown of the pandemic. Unimaginable.

So, starting early April, under the umbrella of distancing, the careful crop clipping and wary winery work went on and the crop came in. This fruit that carries these remarkable twists and turns, barely half a crop, ferments calmly done in isolation, save for some careful tending by a skeleton crew cautious of becoming so. Twenty 20 was a challenge and the wines are a blessing to have. Some are beautifully harmonious and well structured, others more elegant and fine boned. With the deep and powerful 2019s and 2021s bracketing them the 2020s are clearly lighter and will take a couple of years to build and fill out. They are certainly delicious, some much more than, but really, it was a season that was hardly 20/20!

Where in the World is Bindi Wines?

Bindi is in Gisbourne within the Macedon Ranges, one of Victoria’s cool climate wine regions. Look to the north and a little west of Melbourne.