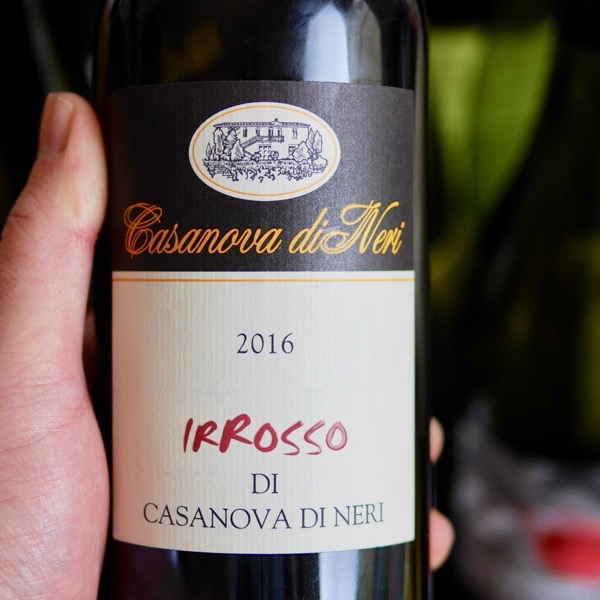 I haven't seen much better value than this baby coming out of Montalcino! Together, Delicious. Wicked Texture!

This is the first time I’ve tasted wine from these guys & it’s a cracking start. Looking forward to trying more!

The most recent creation for Casanova di Neri is the IrROSSO. This celebrated result is a union between Sangiovese and small addition of our own grapes from different varieties: it gives the idea of a young red, significant but with easy drinkability and is linked to the characteristics of its native territory, with an unforgettable Casanova di Neri stamp.

The 2016 vintage gave a very drinkable Irrosso but capable of developing in to a richer wine over the years. The high pleasantness is combined with balance, harmony and velvety tannins typical of all Casanova di Neri wines.
The notes of cherry and violet prevail on small red fruits and balsamic hints while on the palate is a good balance between acidity and sweetness of tannins with a moderate alcoholic impact. Finish is bright and clean.
Ready to drink but able to age in the bottle for some years according to our philosophy. GIOVANNI NERI

VINTAGE 2016
The 2016 vintage is the perfect balance among elegance, opulence, structure and complexity.
Winter was warmer than average with some rain in February while budding was regular during the first week of April. Flowering took place on the last week of May with sunnier days, following a mild summer with sporadic rainfall.
Ripening process was slowly but consistent, also thanks to the big range between day and night temperatures right before harvest.

It is a hill with a ridge surrounded by maquis of Mediterranean woods with a unique soil, microclimate and exposure in our territory.

VINIFICATION
Manual selection of the grapes before and after destemming, followed by a spontaneus fermentation without the addition of artificial yeast. Maceration is assisted by a falling down system, and everything is carried out inside open cone-shaped and temperature controlled fermenters for 13 days.

Where in the World is Casanova di Neri