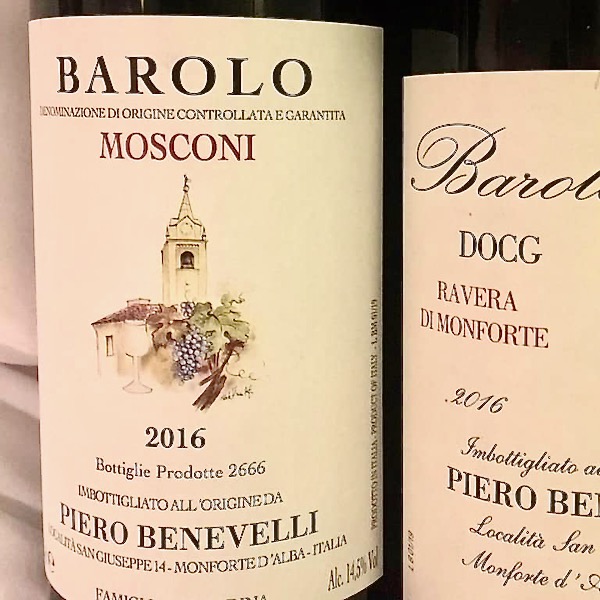 Mosconi joins Ravera di Monforte for the first installment of Massimo’s 2016’s. Sitting next to the Ginestra Cru at a slightly higher elevation. It’s a cru produced by Conterno Fantino and Chiara Boschis. The first time we’ll see this Cru from Massimo. Monforte typically has one of the boldest tannin profiles of the Communes of Barolo. Nebbiolo from Monforte in the hands of Massimo, somehow usually shows much more plusher tannins. Truth will be known when we see it in the glass.

The biggest challenge will be have the patience not to hook in early!

*The Mosconi is due to arrive early September

Benevelli’s Langhe Nebbiolo is one of those wines that you can happily hook into any day of the week and twice on Sunday. Particularly at less than $30 a bottle. The elements that make it such a wonderful daily drink are the same in his Barolo just amplified!

Massimo has a great handle on élévage, the French term meaning upbringing, referring to the period of time a wine is maturing before bottling. The result is great expression of the wine’s personality, layering in of complexity, and, that subtlety that tames some excellent fruit!

His Nebbiolos are perfumed, intriguing, and, elegant, as you move from the Langhe Nebb to this Barolo the depth of fruit builds as does structure to balance it. Just drink the Langhe to protect you Barolo from infanticide! You’ll be seriously rewarded by waiting a few years before devouring it!

I was quite taken with the wines I tasted from Massimo Benevelli this year. The Dolcetto and Langhe Nebbiolo are direct, unadorned wines that capture the spirit of variety, place and vintage. Benevelli’s Barolo Ravera (from the Monforte Ravera) comfortably straddles modern and traditional styles, with lovely early appeal and the stuffing to age for at least a decade, perhaps longer. Massimo Benevelli is off to a great start. If these wines are any indication, the future looks very bright. Antonio Galloni

In the space of just a few years, the wines of Massimo Benevelli have earnt a reputation for offering quality and complexity for well under their asking price. Because of this, some of the best importers around the world (like Kermit Lynch in the US) are now representing Massimo in some of the biggest names of Italian wine. We are lucky to grab a sizable chunk of Massimo’s production but the wines still sell out almost as soon as they arrive.

Whilst Massimo is young and does not have the history of many of the superstars of Monforte, he has the site, the winemaking talent and the personality to achieve greatness in the area.If you have not tried the wines of Piero Benevelli, it is well worth the experience, either in Italy or the rest of the world.

It was in 1978 that Piero Benevelli started out with five hectares of vines in Monforte d’Alba and focused on the traditional grapes of Piedmont: Nebbiolo, Dolcetto, and Barbera. His son, Massimo, started his training in the vineyard at age 14 and quickly learned the core principle that still guides him today—to make great wine, you must first have great grapes.

The young Massimo Benevelli has developed into an extremely talented Piemontese grower. He exhibits a total command of the production process, from vine to bottle. When tasting his production during various stages of aging—in barrel, tank, and bottle—there is a consistency, a touch, an intangible quality that is the mark of something great. His wines show character, soul, and originality.

The Benevelli holdings are mostly concentrated in the southeastern-facing hillside cru of “Ravera” in the deep southeast of the Barolo zone. The wines from Ravera have the distinction of combining the structural strength of neighboring Serralunga d’Alba with the concentration and richness of Bussia and the other crus further north. Massimo’s Baroli are approachable young but like any great Barolo, reveal their true potential after at least five years or more in bottle. His Dolcetto and Langhe Nebbiolo are true Piemontese delights as well—classic and full of pleasure.

All of Massimo’s vineyards are located in the municipality of Monforte d’Alba.
Massimo holds 0,5 hectare plot of Mosconi, producing just 2.666 bottles in 2016.

Where in the World is Benevelli Pierro?

You’ll find the township of Monforte d’Alba in the South Central border of the region (white), to the right you’ll find Massimo’s two Barolo Vineyards of Ravera di Monforte and Le Coste di Monforte. Click on the map to enlarge it.