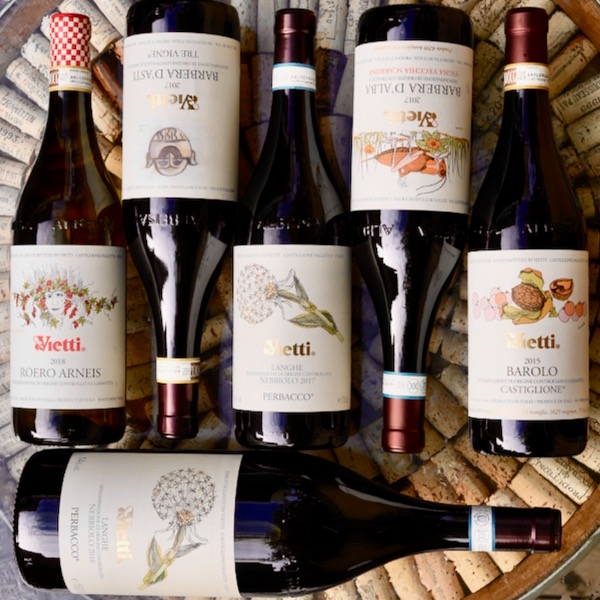 A Wine Bite with Luca Currado of Vietti

Drink the Wines of Vietti Live with Luca! This will be EPIC!

This is your chance to try an array of wines from Vietti with Luca, live from Italy! Grab a pack, top it up with the extra’s you want and we’ll ship it to you so you can join in the tasting!

Luca & Elena have always stayed true to their convictions, and, history, acknowledging the wisdom of their family, and elder peers. While their Cru Barolos have brought them international fame, they have worked to protect patches of history for both their family and the region. Listen to Luca share his stories of retaining the Scarrone vineyard planted to Barbera when his father had planned to replant it to Nebbiolo, saving Arneis from being reconciled to a note in a wine book, and, more recently going back to Barbaresco, acquiring a parcel or Rabajà, and this becomes clear.

The drive for constant improvement continues with a parcel of Monvigliero now in the stables, whole bunch techniques are being applied with the help of Jeremy Seysses from Dujac. Meanwhile, Vietti has released it’s first Timorasso, a wine that I am looking forward to trying. Grapes for this white coming from vineyards located in Monleale in the Alessandria Province.

Luca and Elena are part of the perfect storm, mature vineyards, great sites, the hard work and detail needed to produce quality fruit, and, the experience to make the most of what a vintage has to throw at them!

We’ll schedule the date for this session once are certain everyone will get their wine in time!

Back in 2005, I spent some time at Vietti. Their winery sits in the castle atop Castiglione Falletto. It’s walls broken by slit windows for archers to defend the grounds. The escape tunnel leading from the castle to the plains below had been filled in only a few years prior to my visit. Somehow they’ve managed to modernise aspects of the winery carving into the rock without collapsing the ancient buildings surrounding it.

One of my earlier experiences of Vietti was at the Australian Wine Research Institutes Advanced Wine Assessment Course. A blind bracket of 9 Nebbiolo’s was presented, Vietti’s Perbacco from 1998 and Brunate from 1996. The Brunate was superb. My notes from the tasting read “Very complex, great harmony, texture, rich, long, very together, perfumed, incredible layers and vibrancy.” The Perbacco excellent, particularly at 1/8th the price. “Great purity, balance, and poise. Supple with an excellent core of fruit and lovely floral notes.”

In many ways, little has changed. Perbacco, typically declassified Barolo, is the wine to crack while you’re waiting for your Barolo to mature!

Luca & Elena have always stayed true to their convictions, and, history, acknowledging the wisdom of their family, and elder peers. They have also worked to protect patches of history for both their family and the region. Listen to Luca share his stories of retaining the Scarrone vineyard planted to Barbera when his father had planned to replant it to Nebbiolo, saving Arneis from being reconciled to a note in a wine book, and, more recently going back to Barbaresco, acquiring a parcel or Rabajà, and this becomes clear.

The drive for constant improvement continues with a parcel of Monvigliero now in the stables, whole bunch techniques are being applied with the help of Jeremy Seysses from Dujac. Meanwhile, Vietti has released it’s first Timorasso, a wine that I am looking forward to trying. Grapes coming from vineyards located in Monleale in the Alessandria Province.

Vietti intrigues me. Some of the best Barolo I have devoured have come from their winery. Watching the wines evolve over time, both the same vintage and across vintages has been fascinating. Modern technology at times pierced the tradition. Last year a vertical tasting going back to 1982 was fascinating. It again highlighted my growing consensus that the drinking window for good Barolo, from great years, starts at around 10 years and is right in the zone between 15 and 20 years. The Villero Riserva is in the rare class of Barolo that will push this window out to 30 years+.

Whilst Vietti have always produced more structured wines, they have never shifted to the overt new oak regimes of the likes of Clerico. The wines have always shown harmony and balance.

The Vietti family has been producing wine in Castiglione Falletto in the heart of Le Langhe in Piedmont for five generations, with 33 estate vineyards located across all 11 communes designated for the cultivation and production of Barolo, plus Roero for Arneis and Agliano Asti for Barbera and Moscato. In 2016 Vietti was purchased by the American Krause family, however current generation winemaker Luca Currado-Vietti continues to direct the Vietti Estate meticulously, together with his wife Elena Penna-Currado, to produce some of the finest and most representative wines of Le Langhe.

Where in the World is Vietti?

The Krause Family bought Vietti a couple of years back, leaving, Luca and the Family in full control of production, hence the name below.

2015 began with high levels of snow providing good water reserves. Combined with mild spring temperatures and various rain falls, bud break and flowering were early, followed by an excellent fruit set. From the second half of June throughout July, there was no rain and temperatures stabilized to above-average maximums. Fortunately the vineyards were not stressed thanks to the plentiful water reserves. In terms of quantity, production was average allowing for careful, targeted green harvesting with special care taken to ensure foliage was managed to provide good protection for the clusters. There was no disease pressure so preventative measures were not required. The white varieties were harvested between the end of August and mid-September and the excellent sugars were matched by wonderful acidity. The Dolcetto harvest began around the second week in September and the wines were aromatic, softer and deeply coloured. Barbera is the variety which perhaps most benefited from the 2015 season with the usually high acidity tempered by excellent ripe tannins, dense colours and richly flavoured fruit and body. Nebbiolo ripened perfectly, though slightly earlier than the last few years. The excellent quality of the tannins balanced by perfect acidity will certainly ensure elegant, long-lasting wines with good structure.

Vietti’s 2015 Barolos are good examples of the strengths and weaknesses of the vintage as a whole. All of the wines are fresh and medium in body, with good energy and plenty of drive. At the same time, the differences between the vineyard are not quite as marked as they are in truly outstanding years. Even so, the 2015s here are brilliant. I won’t be surprised if they show even better with a few more years in bottle, as they are among the most reticent 2015s I tasted.

The 2016 vintage was one of the longest-lasting in recent years. Early winter was dry and mild, however from the end of February through March, the temperatures dropped with plenty of rain, providing good reserves of water. The “late” cold delayed the vegetative cycle, and spring proper also started wet with average daytime temperatures but low overnight minimums, helping retain good health. This phenological delay continued until the end of the summer, which began slowly but extended until the end of September.

The white harvest ran from September 5th to 20th, with the wines showing excellent aroma and good acidity due to cooler summer temperature peaks.

The red harvest began immediately after with Dolcetto, followed without a break to the middle of October with the Barbera and Nebbiolo. 2016 was a very good vintage for Dolcetto, but even more so for Barbera, which acquired excellent levels of sugar over a long period of stable conditions, while maintaining the varietal’s typically good acidity. Nebbiolo also achieved good phenological ripeness, a direct result of the perfect warm, sunny conditions of the second half of September. Whilst it is still early, the 2016 vintage wines display excellent balance, generous aromatics and great structure, and in some cases lower alcohols, compared to 2015. 2016 promises to be a vintage which will be talked about for a long time to come!

The 2017 vintage growing year will be remembered for its hot climate, and in particular sparse rainfall. The winter was mild, with only a few snowfalls, while spring was marked by some rain and above-average temperatures for the season. This further facilitated the vine’s vegetative development, which immediately proved to be ahead of time and continued to be so for the rest of the season. Towards the end of April, the sharp drop in temperatures recorded – especially overnight – throughout Italy caused some frost damage, though in the Langhe only the bottoms of the valleys and cooler slopes were affected.

May saw the beginning of a long period of fine weather due to the passage of numerous anticyclones. The meteorological situation stabilized, ensuring excellent conditions in terms of plant protection, so there are no particular vineyard management issues to be reported. The maximum temperatures recorded during the summer months were above average, just as they were in the whole of Italy, but the nights were cooler than in other hot years. Between the end of August and the beginning of September, eagerly-awaited rain helped to accumulate 25 mm of water, which partly rebalanced the water supply to the grape berries for which veraison was now well and truly underway.

Starting from the first week in September, temperatures dropped appreciably and growing patterns were nearer seasonal averages, with considerable differences between day and night temperatures. This situation was further helped by the polyphenolic profile of the red wine grapes with a medium-long vegetative cycle, such as Nebbiolo and Barbera, for which the data differed to those recorded in other “hot” vintages. As a matter of fact, the values observed this year are better in terms of both quantity – accumulation of anthocyanins and tannins – and extractability, an essential factor in wines for ageing. From the point of view as well of the length of the vegetative cycle, many differences with other early ripening vintages can be observed: in fact, although the period that elapsed between bud burst and technological ripening was earlier than usual this year, it still lasted an average of 185 days, while in other similar years it was around 170 compared to the 200 days of vintages considered “late-ripening”.

In short, the cycle was early this year, but the vine was able in any case to enjoy a full development cycle. As regards the main components of the wines, it should be noted that although alcohol contents are significant, they are not out of the average, especially in Dolcetto and Nebbiolo base wines. Most probably this is because the vine’s metabolic processes were interrupted during the hottest period, which meant that though the harvest was early, values were normal. Furthermore, a good level of pH has been recorded, while lower total acidity can be traced back to a smaller quantity of malic acid, demonstrating the excellent degree of ripening of the grapes.

The lower yield recorded in the vineyard is in keeping with a year in which there was sparse rainfall, with clusters which were compact when picked and showing must-skin percentages within average ranges. On the basis of recorded data, this vintage can certainly be remembered as one of the earliest of recent years, given that the picking of the nebbiolo grapes began in the middle ten days of September, and ended early in October, around two weeks earlier than the norm. The 2017 vintage has given us wines showing great promise considering the fears of the beginning of summer, confirming once more how well-suited and well-equipped the hills of the Langhe are for vinegrowing